Face coverings to be mandatory in shops 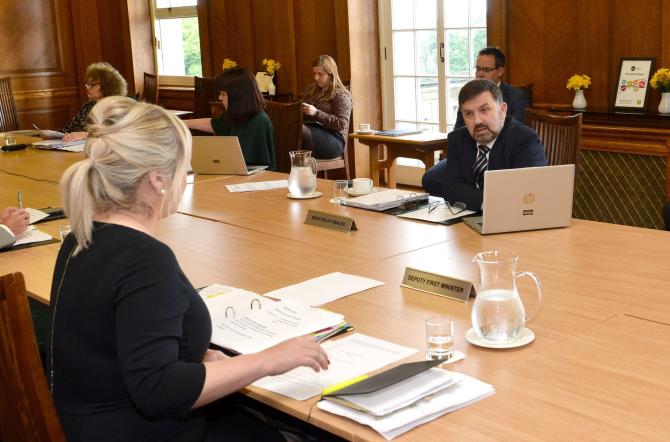 FACE coverings will be mandatory in shops in Northern Ireland from next month.

The measure to stifle the spread of coronavirus will be compulsory from August 1 but enforcement will begin on August 20 if necessary.

Stormont ministers will initiate a public awareness campaign over intervening weeks in the hope of securing voluntary compliance.

Health Minister Robin Swann said: "We are now starting that period of engagement and education with the general public to try and get as many people as possible wearing face coverings between now and that date."

He expects at least 80% compliance by August 20 amid attempts to prevent a second wave of infection this autumn.

First Minister Arlene Foster said: "I think it is a graduated approach, it is an approach that recognises it is a big cultural change for a lot of people in Northern Ireland.

"I think it is important that we engage with the retail sector in particular to get them to buy into this issue."

The Executive will meet on August 20 to consider how widespread the uptake of face coverings has been and whether enforcement action is needed.

- Spectators at outdoor sports events where access and social distancing can be controlled;

- Reopening of spas and swimming pools;

- Recommencing of funfairs and bowling alleys.

Executive ministers have agreed to write to the British and Irish Governments asking them to convene a meeting of the British-Irish Council to try to resolve issues around travel and coronavirus.

It will be called Stop Covid NI and will be aimed at interrupting the spread of coronavirus by finding those most at risk of catching it.

Should someone receive a positive test for the disease, the person will be sent a unique code via text message.

Once the user gives permissions, the app will release data from the handset to a server so close contacts also using the app can be traced following a "digital handshake" between their devices, Stormont's health department said.

The intention is to alert close contacts of a patient within a day or two of a positive test.

The software's use will be voluntary and identifiable information will not be stored to comply with data protection regulations, an official told the health committee of Assembly members.

The operating system is designed by Google and Apple and its use will require Bluetooth to remain on.

Those promoting the app will engage with major employers including the health service, universities, meat factories where low temperatures present greater risk of Covid-19 spread and Royal Mail.

Eight more people tested positive on Thursday in Northern Ireland but there were no more deaths, the Department of Health said.

Sixteen clusters have been identified by tracing teams who phoned close contacts of an infected person to establish if they have been exposed.

The app is designed to complement that work.

A cluster is defined as two or more laboratory-confirmed cases among people associated with a workplace, school or similar setting. Illness must begin within 14 days.

A total of 133 cases were associated with these clusters, and six involved more than five cases, the Public Health Agency in Northern Ireland has said.