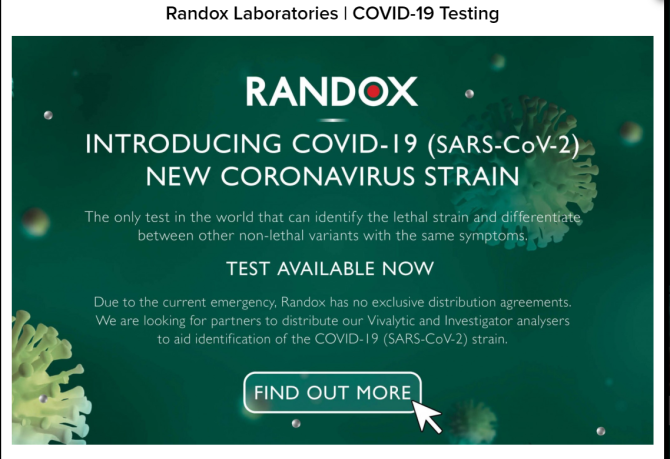 SPECULATION that Northern Ireland based global health care firm Randox has been asked by the UK government to set up a designated testing site for COVID 19 has not been denied by the firm.

Based in Crumlin, Co Antrim, Randox Laboratories, an international clinical diagnostic solutions company, has developed a test for COVID 19, currently in use in China and other pandemic hotspots.

The Chronicle asked Randox to confirm speculation that the firm has been asked by the UK government to set up a designated testing site for COVID 19 and is reaching out to universities for equipment and assistance.

Refusing to deny the claim, a Randox spokesperson responded by saying “I can confirm that we are currently conducting some contingency planning.”

South Antrim MP Paul Girvan said: "If confirmed, I welcome this opportunity for a UK and South Antrim based firm to be a major player in the testing process in Great Britain.

“As I understand it this will be a designated programme of testing in conjunction with the universities.

“Hopefully increased testing will at least slow down the virus and help ensure that vital workers are not self isolating for nothing.”

Demand has soared since the testing kit was launched last month, with the firm said to be ramping up production in an effort to meet projected demand.

The Irish Times reported last Saturday March 14 that public health officials in the HSE (Republic's Health Service) and NHS are in talks with Co Antrim-based Randox about using the test to help expand and speed up the diagnosis of Covid-19 cases across the UK and Ireland.

The report stated: “It is understood that neither the HSE or the NHS has yet agreed terms with Randox, but the company is hoping to collaborate with both national health agencies on the pandemic.”

The Randox website states: “Randox has developed a rapid test for COVID-19 (SARS-CoV-2), the new strain of coronavirus.

“The only test in the world that can identify the lethal strain and differentiate between other non-lethal variants with the same symptoms.

“The new test utilises Randox Biochip Technology, reporting 540 results in less than 5 hours on the Randox Evidence Investigator, a semi-automated analyser that is capable of processing 54 patient samples simultaneously.”