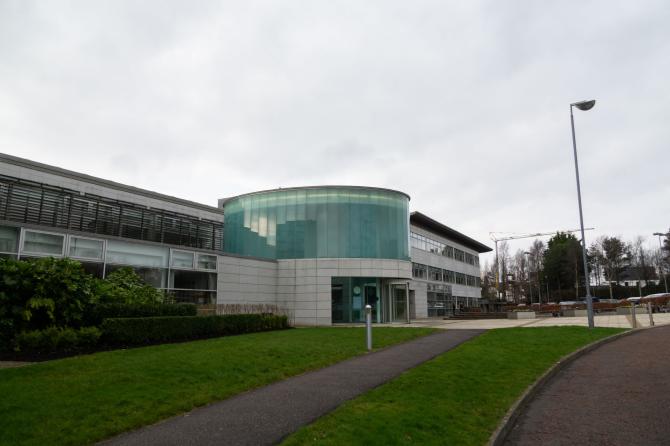 Council Headquarters at Cloonavin in Coleraine.

WHEN the clock struck midnight last Wednesday, a marathon five-hour debate had left most councillors tired, many frustrated, and some very angry.

While the usual divisions emerged over how far cuts should go, which services they should affect and what income-generating measures could be taken to redress the deficit, the most vicious exchanges were over responsibility for the mess.

The SDLP's seven members refused point-blank to contemplate any action other than calling in the Stormont department responsible for overseeing local government amid allegations of “mismanagement” by senior officers.

“Only then will this council regain public confidence,” said Stephanie Quigley.

“A hike in rates does not solve our problems and the ratepayer should not have to pay for financial mismanagement.”
Backed by independent republican Padraig McShane, the SDLP has consistently maintained councillors have not been shown the whole picture of Cloonavin's financial woes.

And they have called on both the Communities minister and the Local Government Auditor to intervene.
Though last week, when members first convened to strike a rate and their calls fell on deaf ears, the chamber did agree to defer further debate until independent consultants had been through the books.

At a cost of £10k, the Chartered Institute of Public Finance and Accountancy (CIPFA) worked over the weekend to provide a report which members received on Wednesday morning.

And even before the debate got started, the UUP suggested the report vindicated figures upon which the rates process would proceed.

“This validates the information given to this council,” said Darryl Wilson

His colleague Richard Holmes went further - staff were due an apology, he said.

It certainly wasn't coming from Mr McShane, who insisted a CIPFA report went nowhere near the forensic audit he was demanding.

Instead, it merely provided “some sort of cover for individuals who can now say they have done something.”
Meanwhile, attention had turned to press coverage attracted by the council's financial deficit.

“A lot of scaremongering” was how the DUP's John Finlay described stories like those that suggested the council would be reduced to monthly bin collections.

It was in the press that many members had been “playing populist politics,” according to Sinn Féin's Cara McShane.
“Less political grandstanding and sensationalism would go a long way tonight,” she said.

If Cara McShane was already frustrated, she was clearly angered further by her brother’s suggestion that Sinn Féin had been “taking directions from (council) directors possibly to the detriment of workers”.

As one of the longest-serving councillors, she was perfectly capable of forming her own opinion of papers placed before her, she replied, and was certainly “not taking direction from officers.”

Later, Mr McShane would anger members further by suggesting they read the judges' remarks in a judicial review lost by the council over a planning application for a north coast hotel.

Without going into further detail, he also raised concerns over issues at the Currengate apartment complex and Irish Society lands.

“There are real problems with this organisation – accountability is the biggest one,” he claimed.

“At the very least, the public deserves answers, because they are not getting them at the minute,” he added.

The response from PUP member Russell Watton was to use the old Ulster-Scots word, “scunnered,” to describe how he felt about the backbiting.

“We have been listening to these allegations of mismanagement and it’s come to the point where it's put up or shut up because it’s creating a toxic atmosphere,” he said.

A conciliatory note was later struck by Darryl Wilson who urged colleagues to “remain calm and level headed.”
He added: “We are in financial difficulties and we have to steer through it together.

“I would urge members to focus on the business in front of us with a bit of dignity and respect.”

Wednesday night's drama took place in front of a public gallery filled with theatre buffs protesting cuts to the Riverside.

It wasn't possible to identify the member who suggested they could perhaps have managed a better performance.