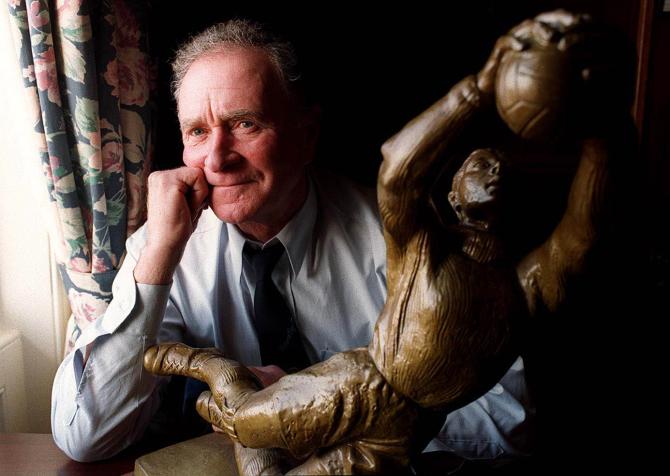 The funeral has taken place of the late Harry Gregg in Coleraine. Picture: Pacemaker.

The Tobermore native was laid to rest at Coleraine Cemetery following a service at St. Patrick's Parish Church to celebrate the life of one of Northern Ireland's adored sporting heroes.

Harry, (87) passed away, surrounded by his family, in Coleraine’s Causeway Hospital on Monday morning, following a short illness.

Thousands of mourners lined Church Street, Queen Street and other areas of the town to pay their respects to 'The Hero of Munich'. Amongst those paying their respects were Manchester United heroes Sir Alex Ferguson, Sir Bobby Charlton and Denis Law.

Northern Ireland legends Gerry Armstrong and Keith Gillespie where also present whilst representatives of Coleraine FC including manager Oran Kearney, Chairman Colin McKendry and members of the current squad turned out to pay their respects to a local sporting icon.

First Minister Arlene Foster was amongst the politicians present at the funeral.

In the funeral address, Harry was described as a truly remarkable talent and made reference to “joy” and “happiness” two sweet emotions which the late Harry Gregg would have experienced throughout his decorated career and family life.

Harry's heroics during the Munich Air Disaster has been well documented this week as the world united once again to recognise the enormity of Harry's actions on that fateful night on February 6, 1958. Earlier this week, Sir Bobby Charlton – the last remaining survivor of Munich - led the tributes to his former teammate, describing him as a “heroic figure”.

“I was proud to call him a team-mate,” said Sir Bobby.

“For all the matter of fact things Harry said about that night in Munich, for me, he will always be remembered as a heroic figure.

“A shining light both on and off the pitch he deserves to be remembered as one of the greatest names in Manchester United’s history.

“Harry will be deeply missed and our thoughts are with Carolyn and his family at this very sad time,” he added.

Harry Gregg started his career at Windsor Park Swifts while he was still an apprentice joiner, also playing for his local club Coleraine before moving to England at the age of 18 to join Doncaster Rovers.

He moved to Manchester United five years later in a deal which, at the time, saw him become the world’s most expensive goalkeeper.

Gregg won 25 international caps and was named the best goalkeeper at the 1958 World Cup in Sweden, where he helped Northern Ireland reach the quarter-finals, just months after Munich.

After hanging up his gloves, Harry went into management, taking up the top job at Shrewsbury Town where he spent four years. He also had stints at Swansea City, Crewe and Stoke City.

In 2012, Gregg was handed a belated testimonial by United, in which a full-strength Manchester United side, led by Sir Alex Ferguson, took on an Irish League select side.

United paid tribute to the Munich air disaster survivors only two weeks ago on the 62nd anniversary of the tragedy.

Politicians, too, have joined in paying tribute to a man revered around the world for his footballing prowess and his bravery.

Harry Gregg's time on earth may have come to an end but one thing is certain that his legacy will live on forever.

*You can see extensive coverage of Harry Gregg's funeral inside Tuesday's Chronicle.