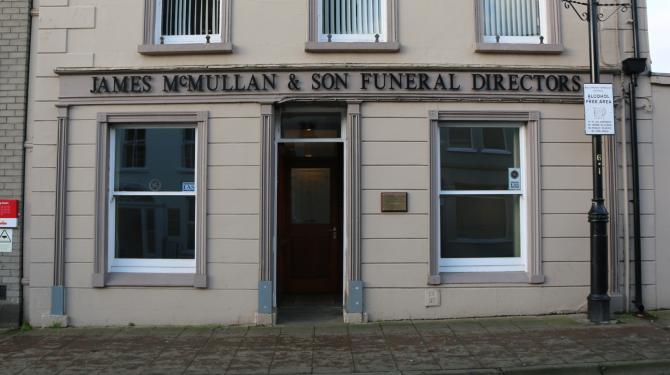 TWO councillors from the Ballymoney area have released statements in relation to the rise in burial fees in cemeteries across the Causeway Coast and Glens Borough Council area that kicked in on January 1.

Earlier this month a group of local funeral directors had released a statement to The Chronicle expressing concerns at this increase, which appeared in the paper on January 9.

The original statement by the funeral directors said that raising grave opening fees overnight by almost 50 per cent will have a ‘massive impact’ on the vast majority of bereaved families in Causeway Coast & Glens.

The statement went on: “They will have absolutely no choice but to pay these fees and our concern is that Causeway Coast & Glens Borough Council is taking advantage of a vulnerable group within the community, in order to help address the council’s budget deficit,” the directors said in a statement.

“Funeral directors have worked hard to keep their charges down in recent years - despite funerals becoming much more complex, personalised events - to help address public concerns about rising costs.

“However, the reality is that it’s huge rises in burial and cremation fees like these that continue to drive the price up.

“A survey earlier this year by Royal London showed that local councils in the UK have hiked burial fees by 6.1 per cent over average in the last year - well ahead of inflation.

“This is bad enough but to hike them up by 45.7% overnight is indefensible and we urge the council to think about the consequences of this decision on local people,” the statement added.

In response, a spokesperson for Causeway Coast and Glens Borough Council said the changes in fees had been agreed by councillors.

“The decision to increase burial charges was part of an overall review of charges in Environmental Services,” said the spokesperson.

“Members agreed the proposals at the full Council Meeting held on October 1.”

Cllr Wilson said: “We as a council regularly review fees and charges for the services we provide. In the most recent review of burial charges, the internal costs associated with burials were presented to Council.

We analysed the internal costs not only to council, but also the fees charged by similar sized councils across Northern Ireland

“The Council subsequently voted to increase charges in line with inflation and to help mitigate against the cost to the organisation.

“I fully appreciate the overall cost of a funeral, in recent years I paid over £4500 to bury a loved one, however I think it is worth noting that over 90% of the total funeral cost went to private companies and the remaining monies to Council for fees.

“The Council, certainly do not profit from funerals, and will always endeavour to keep costs to a minimum for the public.”

Cllr John McAuley said: “As part of a financial review across all council departments, Cemetery charges were analysed and compared to other Councils across Northern Ireland.

“Based on this analysis a finance sub committee proposed that the charges for a plot & opening would be increased by £120 to £500 (+32%), whilst remaining one of the lowest with the NI average £584.

“Part of this proposal was the agreement that burials would remain available 7 days a week, including weekends & Bank Holidays at no extra cost, something which other councils charge a premium for with the weekend average being £685 and Bank holidays £694.

“The Council do not profit from this service and always endeavour to keep costs to a minimum for the public. Even with this increase the cost of cemeteries to council is still not fully covered.

“These proposals were agreed by the full council as part of a finance package of additional income and efficiency savings, which is still considerably short of what is required in order to put the council into an acceptable financial state where it can survive and provide the service people require and deserve.

“Unfortunately this will require tough and unpopular decisions but that’s what we have been elected to do and is what I will continue to do, whilst being honest with you the electorate.

Cllr McAuley continued: “I am disappointed that the press release failed to include the fact that James McMullan & Sons, found the proposals acceptable when I personally discussed them with Andrew McMullan prior to them being agreed as he felt overall they weren’t too bad in comparison to other areas, this endorsement was crucial to me not raising any objections at the meeting.

“Since then, I have held further discussions with Andrew who raised concern at the split of the rise not being quite right between new plots and openings as he felt it would be preferable for new plots to increase more accordingly than the opening of a grave. It was agreed that I would look into this for him, with a view to getting it amended if possible.”

Cllr Wilson provided some information which people may find useful

The Cost of purchasing a plot and the first opening of a grave
(similar sized Councils, 2020 prices) :