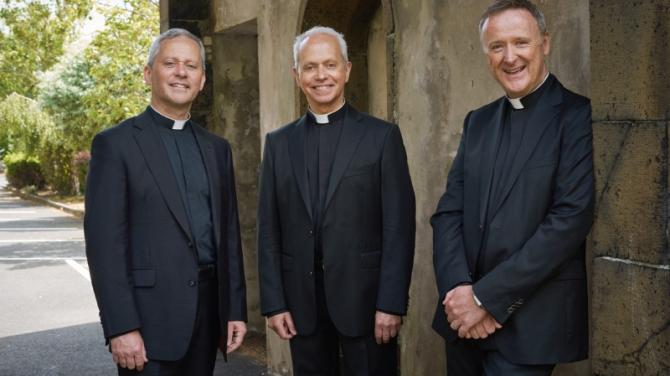 Better known as the ‘Singing Priests’, Fr Eugene O’Hagan, his younger brother Fr Martin O’Hagan, and Fr David Delargy were recognised with Members of the Order of the British Empire (MBE).

All three Priests completed their post-primary education at Garron Tower outside Cushendall.

They were joined on the list by Fr Stephen McBrearty, who held the position of curate in the parish of Dunloy and Cloughmills between 1981 and 1985. Fr Martin O’Hagan previously served as parish priest of Cushendun.

The MBEs are in recognition of the four men’s contribution to their respective fields of ministry, pastoral care and the wider community, according to Bishop Noel Treanor, the Bishop of Down and Connor.

“‘The Priests’, who have nurtured their wonderful gifts and talent for music from their early days together as students in St MacNissi’s, Garron Tower, through their period of priestly formation in seminary, and in subsequent years alongside their priestly ministry within the Diocese of Down and Connor, have become known across the world for their harmonious singing,” said Bishop Treanor.

“Music, the Arts and Culture enable us to transcend and engage with and celebrate the mystery and beauty of life.

“These three priests have been given a platform to reach out to and inspire diverse audiences and communities across the globe, from all faiths and traditions, united in their common love of music.

“The honour that they have received pays particular tribute to their generous charity work effected and realised through the ‘Priests Charitable Trust’ as they continue to reach out in support to those in need.

“This is a challenging and crucial ministry of pastoral accompaniment which aims at bringing healing and reconciliation to the wider community.

“His award recognises the work of the churches as they continue to minister to all people across the community, especially those who are marginalised.”