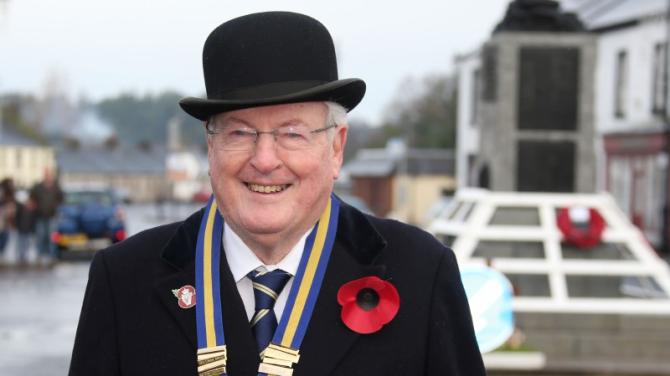 LOCAL resident James Fairbairn has spoken of his immense pride at being named in the Queen's New Year's Honours List.

James, commonly known as Jim, has been awarded with a British Empire Medal (BEM) for 'Services to the Community in Northern Ireland'.

James has been involved with the Royal British Legion for four decades, as well as being on the Board of different charitable organisations throughout the Province.

He said: “I was a bit surprised when I opened the letter and it said I was a recipient of the Medal.

“I am delighted and humbled and it is really nice present before my 80th birthday.

“I first got involved with the Royal British Legion in 1979 as a treasurer, before taking over as President of the Bushmills branch around ten years ago.

“I have also been on the Board of different charities throughout Northern Ireland.”

The former Ballymena Academy pupil told The Chronicle that his year at school have certainly exceeded expectations.

“In my form year at school, four of us have went on to be honoured by the Queen,” he explained.

“It says a lot for that year that we have all been honoured.”

Glenda Rodgers McCormick, who hosts the annual Bushmills Through the Wars Exhibition, congratulated both Jim and Robert Thompson on being awarded the Honours..

“Congratulations to Mr Robert Thompson and Mr Jim Fairbairn on receiving their BEM on the Queen's Honours List,” she said.

“I have known these gentlemen for a long time and did a lot of research with Robert also travelling to the Somme with him.

“Jim Fairbairn as President of our local branch of the RBL is a great supporter of Bushmills Through the Wars.

“Many congratulations to both of them.”