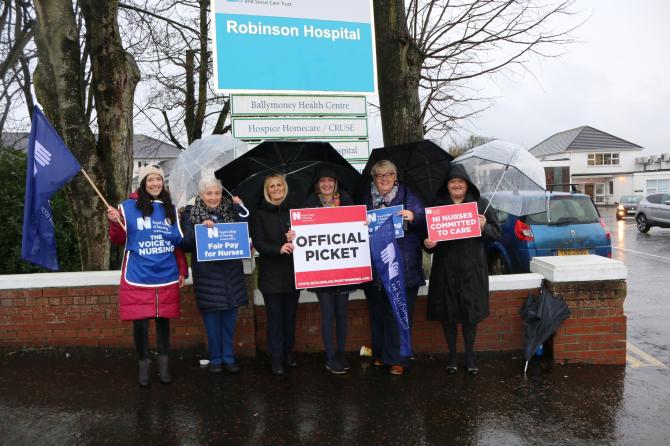 HEALTH Professionals from the Robinson Hospital, Ballymoney, are manning the picket line today, joining 1000's of colleagues in the province wide nurses strike for equal pay and improved conditions.

With NIPSE and the Royal College of Nurses also represented Claire, Geraldine, Gemma, Francis, Majella, Jean and other colleagues from the Robinson joined UNISON members across the whole health and social services system in their strike action.

“Nurses are not paid the same as other staff across the water, when we are all the same NHS and the work load is the same, if not worse,” a spokesperson for the women told The Chronicle, “no one wants to strike, patients suffer, staff suffer.

“It was a big step for nurses to strike, we are committed to care and to our profession, but sooner or later you have to take a stand, everyone needs their nurse or doctor!"

In a show of solidarity approximately 5,000 Unison health staff members, have staged this 24-hour strike.

This is the first nurses strike in 103 years with other grievances including poor staffing levels and the fact that agency staff are often on higher wages than NHS staff.

Conditions were cold, wet and windy, but the strikers seemed well supported by the public, “we are getting plenty of toots from drivers passing,” they said.

The women were agreed that the absence of a Stormont Executive was a major stumbling block.

A 6.5 per cent pay rise over three years was agreed in 2018 by unions but it could not be rolled out in Northern Ireland due to the absence of a devolved government.

“Anyone standing out here today is not getting paid, but the MLA's haven't worked in nearly three years and are still getting paid,” they were agreed.

“Everyone with power and authority in this society has conceded that our cause is just. We have had ‘sympathy’ from the UK Government through the Secretary of State, from all political parties that stood on our picket lines and from the leadership of the health service. But we have no resolution.

“UNISON has agreed emergency cover and our members have volunteered to provide it. We have never seen such determination in health workers who have been devalued and disrespected for almost 5 years. For 3 weeks they have stood up for their rights and have now put the health service at the top of the political agenda.

“Despite their sacrifice there is still no action from those in power. It would appear that health workers, patients and the public at large are being used as pawns in a political game.

“As we enter this significant period in the industrial struggle the consequences lay firmly on the shoulders of the UK Government, our elected politicians and the leadership of the civil service. The decision they take in the next few hours will have lasting consequences in our society either for good or for ill.”