In tribute to Alastair 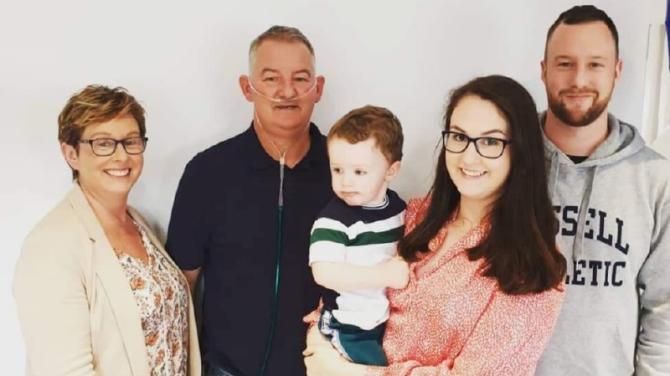 TRIBUTE has been paid to Cushendun man Alastair Magee who sadly passed away last week.

Back in September, The Chronicle featured Alastair's story after he was handed a lifeline in the form of a possible lung transplant.

In February of this year after rigorous tests Alastair was told he was eligible for a lung transplant which would give him a second chance at life.

But that wasn't to be, as just a few days before the planned procedure, Alastair sadly passed away.

With their permission, we have included it below.

“Although we knew he was struggling with his illness, the news of Alastair’s sudden passing sent shockwaves through the local community and indeed among farther reaches as well. It was particularly tragic given that he was due to travel to Newcastle-upon-Tyne in just two days for what we all hoped would be a life lengthening lung transplant.

The initial reactions in various social media outlets universally described Ally as ‘a gentleman to the core’, popular with everyone and a true legend on the hurling field. He was a most unassuming and likeable teammate, classmate and soulmate. In fact, he was just everybody’s mate. He was the quiet man with whom everyone wanted to engage or just share a pint with. He always brightened the company he was in with that infectious laughter usually to the extent that tears were dripping down his face and he was rendered speechless.

He also possessed a hilarious persona of impending doom when with even the slightest thing not going according to plan, he was often heard to say, “It’s all up now”. That Private Fraser (Dad’s Army) characteristic was never more accurately demonstrated while he was working on an ACE scheme and his gang managed to ‘cope’ a tractor on the beach. Although the story is likely to have been embellished, Ally allegedly ran away from the scene, hands in air repeatably shouting “It’s all up now Mammy”.

He never uttered a harsh word about anyone and although there were many brawls during his hurling days, Ally was never the instigator and rarely a participant. He was a peacemaker exuding authority just by the way he conducted himself, but he knew how to be the hard man when it was needed.

The fact that Alastair became one of the Emmet’s most accomplished hurlers overlapping many senior team changes is even more remarkable given that he had virtually no coaching at juvenile level. He was just a natural talent with a killer instinct for goal, particularly when it was needed most. His ‘super-sub’ appearance at the twilight of his career in the 2000 senior championship quarter final versus Rossa, when he struck a wonder goal, will be recalled in conversations for many years, despite his cousin Dominic’s claims that he was really the day’s hero.

Most of his early hurling was learned from battering balls up and down Riverside Crescent initially with his brothers and latterly with the McNeill neighbours. He inspired many of the players who would eventually become one of the clubs most successful teams during the 90’s. Giving Alastair the ball anywhere from the half-forward line and no matter how many defenders he needed to evade, there was always a high chance he would net that all important goal. He did it repeatedly against the Johnnies and Rossa in games that ensured relegation was avoided when the more inexperienced players around him needed that cool head. His nickname taken from the legendary Chelsea goal scorer Gianluca Vialli was truly merited.

In his heyday with that trademark moustache and jet-black hair, the Tom Selleck lookalike was a magnet for the ladies, but he never allowed this to distract him from his commitment to hurling. The only time he had to be coaxed about anything hurling related was when to hang up his boots. When he thought his best days were past him,we knew there was still that chance that V’Ali could still get that vital goal. He was the Player of the Year several times, but Alastair will be remembered as our All Star and if there was a Hall of Fame for Antrim club hurlers, he certainly would have been invited into it.”