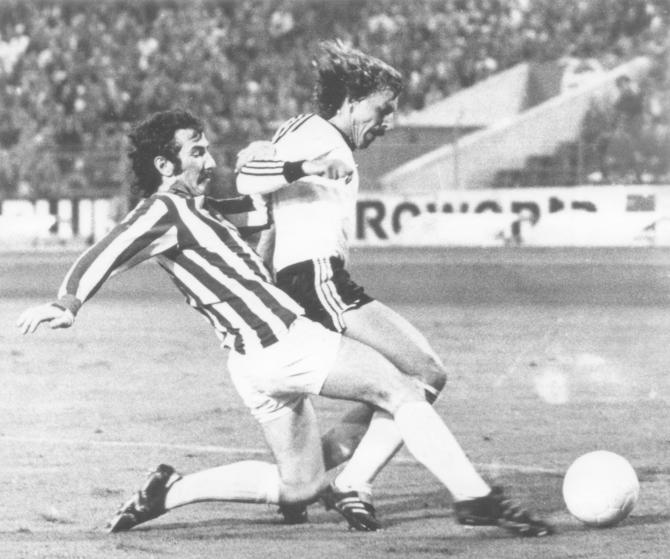 Liam Beckett in his footballing heyday, playing for Coleraine against Eintract Frankfurt in Germany in 1975.

And the good news is that you can get your hands on a copy in time for next weekend, thanks to The Chronicle.

For, we have FOUR copies of the book to give away thanks to those kind people at Blackstaff Press.

Released earlier this month, 'Old School' is Beckett's follow-up to his first book, 'Full Throttle.’ It focused principally on his relationship with legendary road racer Robert Dunlop and his time in the sport.

However, his new book expands to cover his time in football, firstly as a player with Coleraine, Crusaders and Drogheda Utd and then as a manager with both Cliftonville and Institute.

He goes on to talk about becoming a pundit, both on radio and in the written press, and offers his customary forthright views on the state of the game today.

The Ballymoney man also discusses his charity work and how all these experiences led him to being awarded an MBE at Buckingham Palace in 2017.

The book concludes with the one-time plumber reflecting on his life growing up in Northern Ireland at the heights of The Troubles.

However, in typical Beckett fashion, he ends on a positive note.

“When I look to the future there is a lot to be positive about,” he writes.

“Northern Ireland has so much to be proud of and so much potential, if only the political parties find enough common ground and get back to work.

“Otherwise, it looks like I'll have to bring my boots out of retirement, dust them down and give all those politicians a good boot up the hole!”

* To be in with a chance of winning a copy of ‘Old School: Beckett, Bikes, Balls & All,’ check out Tuesday’s edition of The Chronicle.