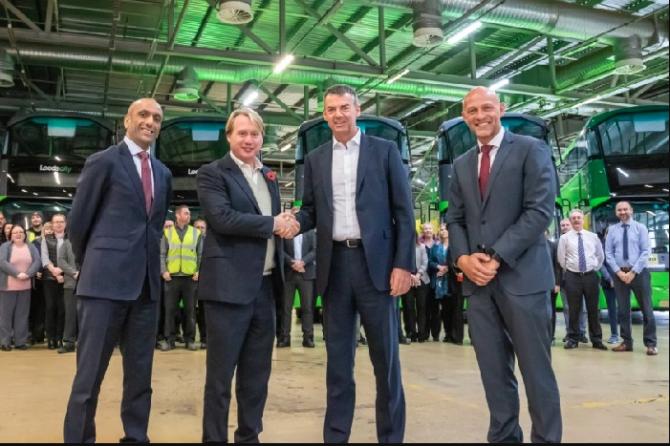 THERE  was a glorious sight in Galgorm last week as the first new fleet of buses   left the Wrightbus factory   following the company's acquisition last month by new owners ‘Bamford Bus Company.’
36 buses, out of an order of 55 were delivered to First Group for use in Leeds. The overall deal is worth about £13million.
New chief executive Buta Atwal said the delivery was “a clear signal of our intent to drive forward the Wrightbus business and grow the company.
The positive sign comes after 1,200 lost their jobs when the company was placed into administration, before a takeover deal was done between the Wright family and new owner Jo Bamford, who will serve as Wrightbus' executive chairman.
This delivery is certainly a sign that at least some staff are getting back to work, but there is still a question mark over how many will be retained by the new owner, Jo Bamford. A “full production line” is expected to be in operation early in the new year.
MP Ian Paisley, who was involved in  negotiating the takeover deal by the Bamford company welcomed the news of the new buses and the prospect of employment returning to the factory.