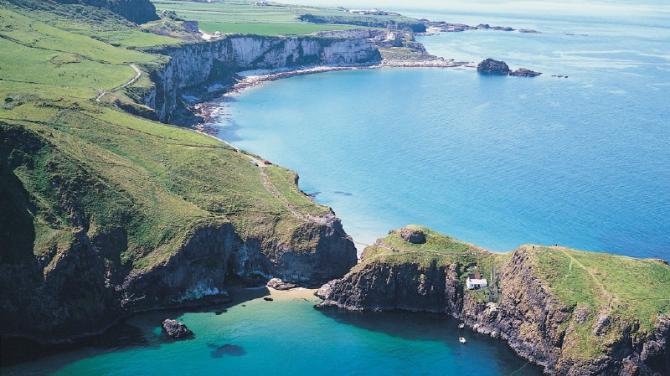 COUNCILLORS have voted to press ahead with a half a million pound scheme to transform a view point close to Carrick-a-rede.

The decision came despite repeated insistences from officers that Cloonavin does not have the resources to complete the project.

Last year members approved plans to create a “world class walking route” between Portstewart and Ballycastle that would remove some of the existing diversions along main roads.

The plan includes development of ‘trailheads’ along the route, one of which is earmarked for the Portnareevey site.

At that time officers said they were hopeful of securing most of the funding from the Rural Development Programme (RDP).

When the matter was raised last month at the council's Leisure and Development Committee, members were told plans had “stalled” because it was not on a capital projects priority list drawn up by elected members.

However on Tuesday, at the full council's monthly meeting, UUP Glens representative Joan Baird said she understood funding had been offered by the Department of Agriculture Environment and Rural Affairs.

“This is a very important point on the Antrim Coast Road and I'm very keen that we don't turn down almost half a million pounds,” said Councillor Baird.

She went on to describe how the site overlooked one of the most popular tourist attractions in Carrick-a-rede while further benefiting from views out towards Rathlin Island and Fair Head.

“I understand the money is there. And there's an old adage, strike while the iron is hot,” she addded.

In response to Cllr Baird's proposal Director of Leisure Services Richard Baker pointed out that it was the councillors themselves who'd designated which projects were to be priorities.

And while significant funds were available his team were simply “maxed out” with existing projects, he said.

“It's unlikely we would have the resources to deliver in the timescale required by the RDP,” added Mr Baker.

“This is a gift to us in terms of funding that's been presented,” she said.

Cllr McShane went on to say she was “disheartened” by “resentment and pushback” against schemes aimed at benefiting the Glens area, such as the Ballymoney to Ballycastle Greenway.

She concluded: “This is a project we can't afford to not support.”

With further backing from the UUP's Norman Hillis and the SDLP's Orla Beattie, the proposal to press ahead with the scheme was approved by 21 votes to 10.

The plan is to create a section of trail almost a kilometre long connecting the car park with Carrick-a-rede and a safe footway on a dangerous section of the coast road.

The path would be diverted around the perimeter of the site taking advantage of spectacular views westward over the rope bridge and east towards Fair Head.