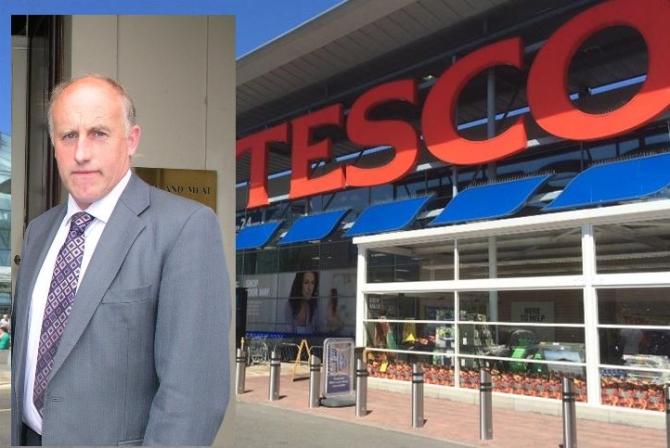 North Antrim's Mr William Taylor (inset), spokesperson for Farmers for Action, is calling for a boycott of Tesco stores in the wake of a vegan sausage ad.

LOBBY group Farmers For Action (FFA) are calling on people from Northern Ireland to boycott shopping in Tesco following the launch of their advert campaigning for vegan sausages.

The ad, called The Carl's 'All Change' Casserole advert, is part of Tesco Food Love Stories which sees a child state, 'daddy I don’t want to eat animals any more'.”

FFA spokesperson, North Antrim's Mr William Taylor has said that the boycott should continue until “they stop this advertising campaign.”

Mr Taylor's remarks come in the wake of the NFU accusing Tesco of “demonizing” meat as a food product which they claim has caused British farmers “significant distress.”

The NFU raised its objections with Tesco over the TV advert first shown on 10 October which they say “promotes a move towards a vegetarian diet!”

“We believe it is vital that children do not establish misleading views of food groups, which may later affect their health and diets.” the NFU statement said.

Mr Taylor said that the FFA Steering Committee would; “go further and point out that Tesco has no right to jeopardise children and teenagers health by pushing veganism on them purely for profit!”

“FFA would say to those considering or embracing veganism that whilst we appreciate the extra sales of vegetables and cereals from our Northern Ireland farms that a lot of earthworms are sacrificed to grow these crops and then at harvest time it is a battle to control crows, pigeons etc.

“In short, FFA would doubt that there is a way for the masses to go vegan without sacrificing animal life. This is real life!”

The Chronicle asked Tesco to comment on the move, with a spokesperson saying:

“Our Food Love Stories celebrate recipes both with meat and without. For those customers who tell us they are looking to eat a little less meat, our Plant Chef range offers a delicious, affordable alternative. Our aim is always to offer choice. We remain absolutely committed to working in partnership with all our UK farmers, and we value the vital role they play in providing food for our customers.”