From Mizen Head to Malin Head in aid of Pulmonary Fibrosis 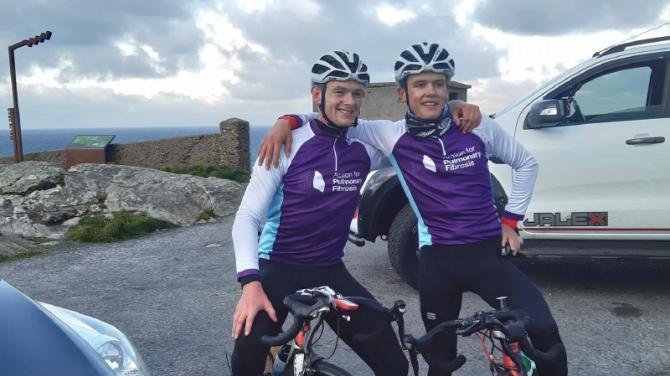 ON FRIDAY of Last week 17-year-old Kevin McCambridge from Cushendall undertook a gruelling 360 mile cycle, completing it in just 24 hours, to raise awareness of Pulmonary Fibrosis.

By Kevin's side was his friend Mitchell McLaughlin and bringing up the rear was Kevin's uncle Seamus McCambridge and his friend Fergal McMullan.

Speaking to The Chronicle, Christine, Kevin's mother, said she is extremely proud of her big-hearted son.

She said: “We live in Cushendall and it's a small community where everyone knows everyone else.

“Kevin was moved recently when he read about Alastair Magee being on the list for a transplant after being diagnosed with pulmonary fibrosis. He wanted to raise awareness of this terrible disease that there's no cure for.”

No stranger to two wheels, Kevin was part of the Nicolas Roche Performace Team during the 2019 season and is now under contract with Ribble.

Amongst his achievements he counts 2nd at Time Trial @ Gorey international 3 day and taking part in the Ulster Time Trial Championship.

Mitchell has been selected for Zippy team this season and also has awards to his name for cycling – but it was a true testament to his friendship with Kevin that he signed up for the Mizen Head to Malin Head cycle, which saw them cycle 360 miles in just 24 hours.

Christine told The Chronicle: “The boys faced a tough 24 hours which included road rage, abusive behaviour towards them and a brush with sleep on the saddle..than goodness Seamus and Fergal were behind them.

“They said the toughest time was when they hot the 130 mile mark in Cork, they thought they were never getting out of there!”

A few years ago Kevin undertook a cycle from Larne to Cushendall in aid of a very sick community member, so it's in his nature to do good things for others.

Mum Christine concluded: “The pair of them cycled through the night in dangerous conditions, they're both very strong cyclists but to undertake such a long journey wearing their Action for Pulmonary Fibrosis jerseys to raise awareness and funds for PF, it's just a kind-hearted thing to do. I am very, very proud of them both.”

The boys have raised over £1,000 but if you want to contribute you can get in touch with Christine McCambridge or Tom McMillan.