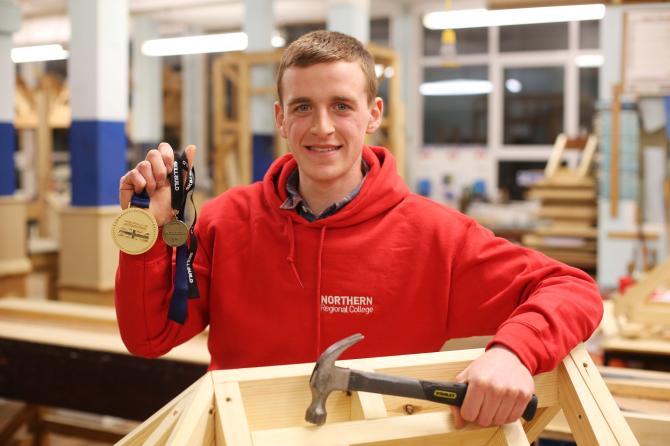 Pictured here with his medals from WorldSkills UK 2018, Samuel Gilmore has had a successful year.

A Carpentry and Joinery apprentice from Northern Regional College has recently scooped a top European award crowning him Best Apprentice.

Samuel Gilmore, based at the College’s Coleraine campus, travelled to Helsinki last week having reached the final of the Apprenticeship category at the European Alliance for Apprenticeship Awards.

To come out on top, Samuel had to impress an expert panel of judges as well as securing the public vote.

The awards recognise excellence in the supply, quality, image, and mobility of apprenticeships. The ceremony took place during European Vocational Skills Week, 14-18 October 2019, which was hosted by the European Commission in partnership with the Finnish Presidency of the Council of the EU.

Samuel said he was “speechless” when his name was announced as winner of the award.

“I never expected to even be nominated for this award. I was shocked and completely speechless. It was such a fantastic opportunity to travel to Helsinki and represent the College.

“I have learned an incredible amount from both my tutor Ian Forsythe at the College and my employer Mark Pollock. My classmates have also been really encouraging. I’m also very grateful to my parents Henry and Edelene Gilmore, their support has been invaluable,” he said.

Winning this award is the latest achievement for the Aghadowey apprentice, who has enjoyed a stellar year. He was the Northern Ireland Young Apprentice of the Year in 2018 and a gold medallist at the UK National Finals of WorldSkills UK Live 2018.

Earlier this year, Samuel represented the College on a visit to South Africa to learn more about the work of apprentices there.

“Samuel is a wonderful ambassador for the College and it is fantastic to see him gaining recognition at an international level. The European Alliance for Apprenticeships is very well regarded within the industry, so this is an outstanding achievement for both Samuel and the College.

“We are all very proud of Samuel’s accomplishments and wish him every success in the future.”

Ian Forsythe, carpentry lecturer at the College who travelled to Helsinki to support Samuel, added:

“This award really is the icing on the cake and rounds off a fantastic 12 months for Samuel. He has worked incredibly hard so it’s great to see that his dedication and hours of extra practice have paid off.

“Samuel is an inspirational role model for the other students who really look up to him. He is a great credit to his family, the College and indeed to the youth of today and I am delighted that his talent and commitment have been recognised by such an accredited body.”