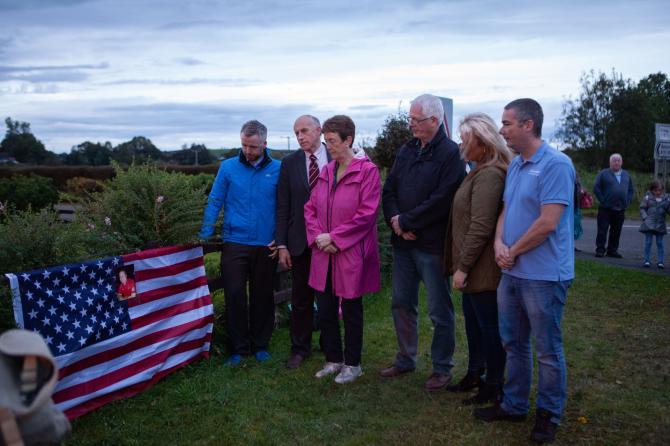 Cllr John McAuley, William Taylor of FFA, Cllr Joan Baird, Bob McCallion of Save the Dark Hedges and Debbie and Chris from Life After, gathered at the Memorial event for US Tourist, Michael Monro

A POIGNANT Memorial was held last week for American honeymooner Michael Monroe at the scene of the tragic car crash that claimed his life exactly one year before.
Around 60 people gathered at the notorious Gracehill Rd/Bregagh Rd junction, including many from the adjacent hamlet of Clintyfinnan, to listen to kind words, a poem and a short reading sent by Michael's widow Caroline, who with other family members was watching from America.
Those present also heard local councillor Joan Baird describe the “fellowship” and “love” felt by those present, but also of the “resistance from government” in respect of getting safety improvements, especially 'Stop' signs at the junction.
Exactly one year on at 7.30pm, Mr Chris Sherrard of the Life After charity, welcomed everyone, with Debbie, also of Life After reading out a message from Caroline, which read: