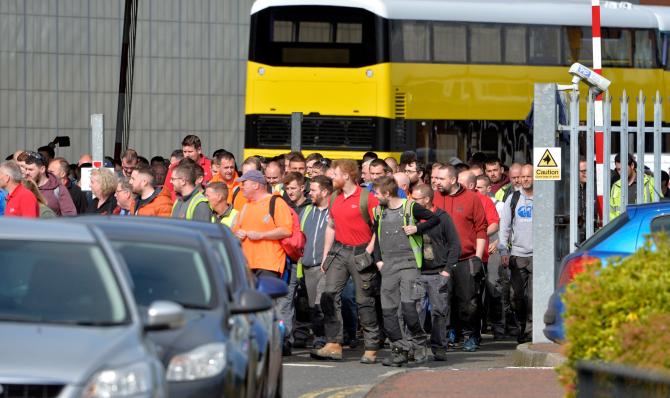 A SPECIAL meeting will be held in Ballymena's Braid Centre on Friday to offer advice and assistance to workers affected by the closure of Wrightbus earlier this week.

Around 1,200 people lost their jobs after the family-owned firm entered administration on Wednesday morning.

However, with dozens of suppliers in the north Antrim and surrounding areas also likely to be affected, the total number of job losses is expected to be much greater.

Michael Magnay and Peter Allen of professional services firm Deloitte have been appointed as joint administrators to the business and have confirmed the company will be retaining 50 of its 1,250 employees.

Jobs and Benefits Offices have been inundated with calls from former Wrightbus staff concerned about their futures.

It's just the latest blow to hit manufacturing in the north Antrim area following the closure of Pattons, Michelin and JTI Gallaghers in the past number of years.

“Ballymena has already lost thousands of decent, union jobs with the closure of JTI-Gallaher and Michelin in recent year, and most recently 86 jobs at Blackbourne  – we face the prospect of further devastation should this closure be allowed to proceed," said Unite regional secretary Jackie Pollock.

“Wrightbus is the last UK company capable of producing double-decker buses – indeed buses with advanced renewables technology – needed by commuters in Belfast, Dublin and London and vital to any vision of a transition to a sustainable future. We call on Boris Johnson to ‘take back control’ and nationalise to invest in securing UK bus manufacturing capacity.”

Political representatives, too, have added their voices to calls for government action.

Friday's meeting in the Braid Centre, organised jointly by the Department for Communities and Mid and East Antrim Borough Council, takes place between 10am and 3pm.

A jobs fair is also being considered to take place next week.

Keep up to date with the latest developments via The Chronicle newspaper and online.