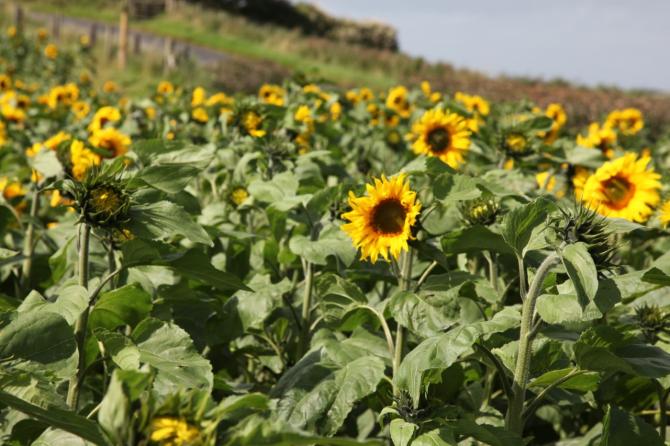 A SUNFLOWER field on the Whitepark Road just outside Bushmills is proving to be a popular attraction after being opened to the public.
The field – which is just over half an acre in size – is owned by Pearl and Archie Linnegan and has been visited by visitors from near and afar.
Access to the field is free but the couple have set-up a donation box with funds going towards the Liver Support Group at the Royal Victoria Hospital and Holy Trinity Church Building Fund in Portrush.
Speaking to The Chronicle, Archie explained the reasons for supporting two worthwhile causes close to their hearts.
“We wanted to give something back to the community that would in turn help two charities in the process,” he added.
“The funds will be given to our Church Building Fund and The Royal Victoria Hospital Liver Support Group.
“We have close friends whose son had a transplant 18 months ago and I played rugby with his father for 20 or 30 years and they are godparents to our eldest son.
"Their son since his mid teens has had liver failure and he eventually got a transplant from a family member and it's helped save his life.
"On account of that and another close friend who is waiting on a transplant, we decided to raise funds for the Liver Support Group.
"It's a Northern Ireland based charity, all the money stays here, there are no administration costs, so it ticked a lot of boxes for us.
"We just felt we could show a bit of solidarity and support friends.
"We undertook a large project three years ago on the Parish Centre in Victoria Street, Portrush. We are still paying the balance off in that and it's ongoing. It was a total refurbishment so every bit helps.
"The Liver Support Group will be further funded by the Parish following the Special Collection at our Harvest Thanksgiving Service on October 23.”
After a quick word of advice from a friend who owns a sunflower field in Omagh, the couple got their very own patch of blooming flowers underway.
"We were impressed during a trip to the south of France, with  the acres upon acres of sunflowers waving in the wind and sun,” Pearl continued.
"They aren't hard to grow and maintain so to speak and there are other Sunflower fields across Northern Ireland, so we knew it could be done.
"There is one outside Omagh and it is owned by a friend of ours, Alan Rainey, and he passed on his advice and what was involved.
"I think he thought we were a bit mad doing a Sunflower field on the North Coast.
"In terms of preparation we had to get the field ploughed, harrowed and seeded. Once you get them in, they are relatively trouble free.
"The weather has been an issue, the two storms in August hit us hard as we weren't expecting such a strong gale at this time of year and that caused a certain amount of damage.
"However, they are remarkably resilient to the amount of constant wind and really heavy rain we have had. They will try and grow and won't give up despite the weather.”
So if you're out and about on the Whitepark Road, at Castlenagree Junction, why not call in and take a look at the beautiful view and do your bit for charity at the same time!