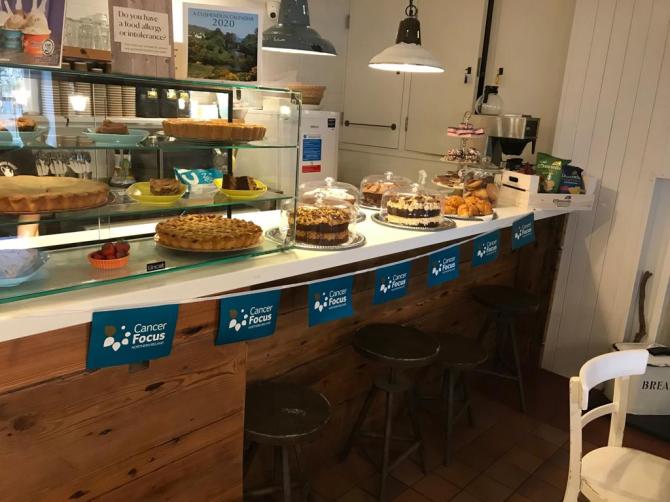 A CHARITY event due to be held in Cushendun this weekend will remember all the families who have been touched by cancer.
Organised by Burt and Colette Klein of The Corner House in aid of Cancer Focus, the day is set to be one to remember.
Speaking to The Chronicle, Colette explained how the event came about and how both she and Burt want to give something back to the cancer charity.
She said: “Cancer touches every single family, it's not something we're immune to and unfortunately for us it has had quite an affect on our family. My son Jonathan and daughter Victoria McDowell lost their father, Stephen, to cancer when he was only 36 and their step father, my husband Burt, was diagnosed with bowel cancer last year. We lost my mother three years coming this October – it's just something that affects everyone.
“Burt had an operation at the beginning of this year and fortunately he didn't need chemotherapy, but we acknowledge he is one of the lucky ones.”
In an effort to raise awareness and raise some funds for Cancer Focus, the Klein family have arranged for the Cancer Focus Keeping Well bus to be at the event, which will be held on Saturday September 21 in the courtyard at The Corner House – weather permitting – but if it's wet the event will be upstairs in the premises.
Burt said: “The gig should be good fun, a bit of music and some locals will be singing. I was in a band called 'Recall' a number of years ago so I will, no doubt, be performing too!   Jonathan, is captain of City of Belfast Golf Club and they have been fundraising over the course of the season for Cancer Focus, so it's been a real family affair.”
Colette continued: “We are honoured that Jonathan was able to arrange to have the Keeping Well van there on the day and we hope to raise as much money as possible for the charity. They have 14 spaces and we currently have a few free so if anyone wants to get booked on for Saturday they can get in touch with us at The Corner House.”
The Keeping Well vans are mobile drop-in units which bring health checks, cancer awareness and healthy lifestyle information directly to people in the community. This service empowers people to take control of their own health and take steps to lower their risk of cancer.  Health checks include: body composition (% of fat, water and muscle in your body), waist measurement, blood sugar level, blood pressure, lifestyle advice, skin scanning, stop smoking support, signs and symptoms of various cancers and information on screening programmes.
Colette, originally from Ballycastle, and Burt took over The Corner House two years ago and said the community support for this upcoming event has been fantastic.
Colette concluded: “We'd like to raise as much money as possible for Cancer Focus. On the day the café will be business as usual, everything from scones, sandwiches, lunches, will still be available and we'll have buckets for anybody who wants to make a donation to the charity.  I will also have a coffee morning later in the year – we just want to give back to a charity that every family walking amongst us will benefit from.”
So if you're about Cushendun on Saturday, call in to The Corner House for a bite to eat, a tune or two and support a cause close to the family's heart.