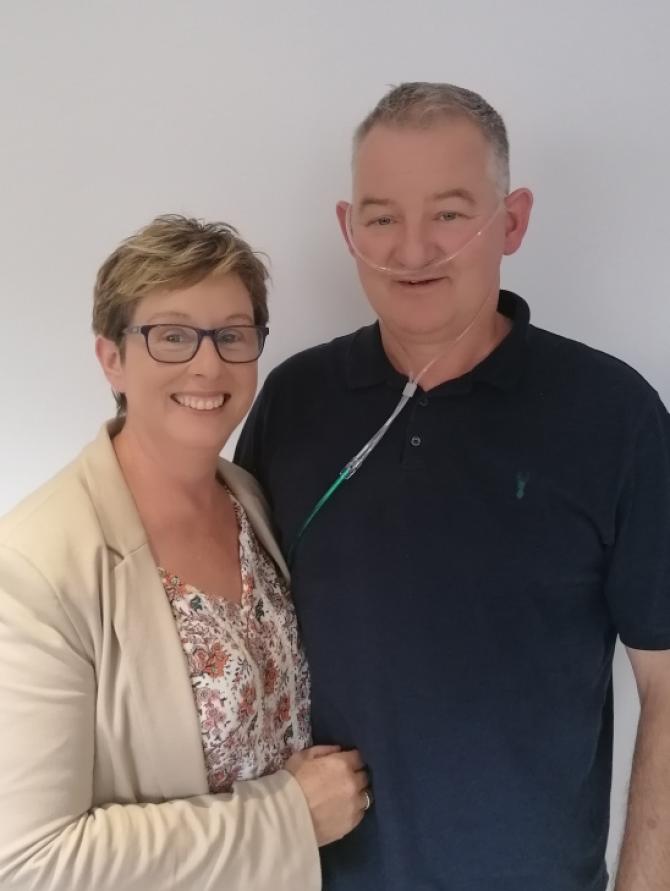 A CUSHENDUN man, whose world fell apart when he  was diagnosed with a fatal condition, has been handed a lifeline in the form of a possible lung transplant.
Alastair Magee 52, discovered he had Pulmonary Fibrosis (PF) in April 2018 following rigorous tests.
The shattering diagnosis hit the family hard - 70,000 people have pulmonary fibrosis in the UK with around half suffering from the most aggressive form of the disease, Idiopathic Pulmonary Fibrosis, which has no known cause, limited treatments and no cure.
Alastair explained: “I noticed my breathing felt different and I kept getting recurring chest infections.  When I finally visited my GP I was sent for a chest  x-ray; then I got a phone call within a couple of weeks to go for another one; that was the start of my six month journey into this unknown world.”
On the day of diagnosis, Alastair and wife Paula, who have two children, are foster parents to two children and have one grandson, felt their world turn upside down.
Alastair said: “When I left the consultant's room, I didn’t know what he was talking about; he had drawn a diagram to explain what was happening inside my lungs, but I just remember hearing him say it wasn’t cancer, so when I left his office, I thought 'well that’s OK then as long as it’s not cancer'.
“It was my wife who informed me on the way home that he had said ‘there are worse things to have than cancer’ and that what I had was exactly that. Paula seemed to know more about the condition as she had done a bit of research about different types of lung diseases; and this is the one she did not want it to be.
“I didn’t talk much about it for a long time; I think I was  adjusting to the thought that there was actually something wrong with me. I took me about another year before I finally came to terms with living with this condition.”
At the time of diagnosis, it wasn't clear to Alastair that his family had   a history of the disease, until Paula did a little research.
Paula, 47,  told The Chronicle: “Alastair's father had COPD, but for all we knew he could have had PF, as he was never tested for it.  His uncle died more recently of IPF  but no one knew he had it until Alastair's cousin discovered it was written on his death certificate and even then, no one knew what it actually was.”
More people die from PF than from leukaemia and many other cancers but it is a little-known disease.  The disease has been in the headlines since 2017 with the death of Keith Chegwin and more recently the diagnosis of TV personality Katie Price’s mother, Amy.
Alastair and Paula come from large, close-knit families in the Glens of Antrim and are childhood sweethearts who have been married for 27 years.
Their daughter Rebecca, her partner and son live in Cushendun whilst their son, James, lives in Australia.
The couple, whose foster children have complex needs, struggled to tell the family of Alastair's diagnosis.
Paula said: “It was hard telling the children about the illness, but we explained it to them in a way they would understand.  They have adapted to how it has affected the routine of the house and both of them are involved in the fundraising events that are running locally in September for Action for Pulmonary Fibrosis to mark IPF Week.”
It was Paula who persuaded Alastair to go to an IPF awareness fundraiser that was in the area after his diagnosis.
Alastair said: “I went reluctantly but got a lot from it, as I got to meet people with the same condition, they knew exactly what I was going through.
“I have been to a couple of support group meetings where other sufferers and carers can communicate with each other and pass on information that helps each other. Both of our families have become involved in fundraising and raising awareness of this disease. A disease that I’d  never heard of before a year ago.”