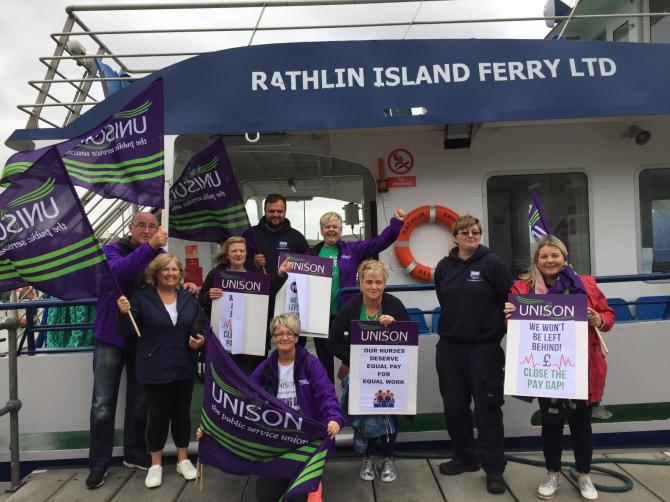 A DELEGATION of UNISON representatives from the Causeway Branch made their way to Rathlin onThursday to support the island's nurses as the fight for equal pay for NI's NHS staff continues.
Rathlin Island, with a population of 150 people, welcomed 60,000 visitors during the busy summer season and with only two nurses, Jackie and Ciara, they had their work cut out for them.
The nurses, one from Coleraine and one from Ballymoney, also have two full time care assistants who live on the island.
Bonnie McCurdy and Susan McKirdy are known as dual workers, ie: they have more than one job, like most of the island's residents.
Speaking to The Chronicle following their visit to Rathlin, Sandra McKeeman of the Nurses Forum said: “It meant a lot to us as nurses and members of the union to travel to Rathlin to show our support to our colleagues. Our motto in the Causeway Branch is that 'no-one will be left behind' and by us travelling to Rathlin we were letting our colleagues know that they matter, they count.”
Sandra, who is a staff nurse in Causeway Hospital theatre, said the time was now to work towards bridging the pay gap.
She said: “Why should NI NHS staff be treated like second class citizens? The pay in England, Scotland and Wales far outweighs the pay here. All we ask is that they pay us all the same when we do the same job.”
Sandra explained that the nurses on the island rent the flat above the surgery and they deal with ulcers to diabetic clinics to cardiac and complex needs of the islanders, whose eldest resident is 90-years-old.
She said: “The nurses say there's a great community feeling on Rathlin and that if someone needed help at 4am they wouldn't think twice to help out. The podiatrist visits twice a year and the GP has a clinic every two months, so there's a wide spectrum of issues that the community nurses have to deal with.”
Sandra explained that in 2019 the pay gap is wider than ever.  She added: “UNISON will be back in talks in mid-September and we will ballot our members for industrial strike action then.  All we want is equality – fair pay for the same job as colleagues in England, Scotland and Wales.”