The crest of a wave 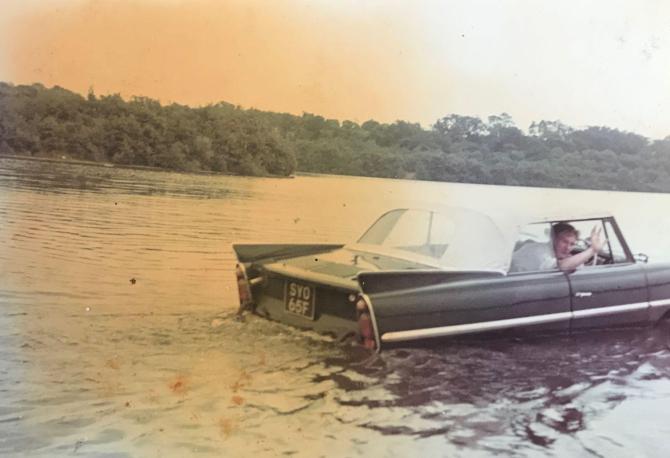 SAM Allen is a natural storyteller, and a gifted one at that. I was invited to speak to Sam last Thursday at his Ballycastle residence during his first visit home in seven years.
Sam was born in Ballycastle with strong familial links to Dervock and is now residing in Canada.
Sam told me about his exploits back in 1968 where for the first, and possibly only time, a car was driven between Scotland and Ballycastle.
After a very welcoming introduction, we lost ourselves in conversation. Nearly two hours was up before we finished our conversation.
Sam was by no means the only member of the Allen Clan. With an interesting story, his ancestral line included volunteers who fought at the Battle of Antrim in 1798, doctors who tended to the Gages of Rathlin in times of need and all that was before we even got to 1968.
In 1968 Sam was over in London for a short period and was hoping to buy a second-hand car. He was walking down the street and in a small garage he saw this unusual car with propellers underneath.
It was known as an Amphicar, the car was made in Germany for a buyer in London who didn’t want it and on transportation from Germany, Sam mentioned the car had been slightly damaged in transit.
The owner of the car at the time was hoping to make space in his garage and was trying to get rid of it. After some conversation Sam walked away having purchased the car for £1100. Following a bit of remedial work, the car was ready for the road (and the sea)!
Men are renowned for their boys' toys and impulse buys but I think this could quite possibly the father of them all.
While the car was used for everyday life in Belfast in the late 60’s it was to take on a much greater purpose at the weekend. It travelled around Ireland, by road and by sea.
After exploring Lough Erne, the Round Tower and Devenish Island, it was time to put it to the test and it was decided to take the car to Rathlin.
After departing Ballycastle, Sam said that they encountered some heavy seas in the middle of the sound and they tried to steer the car towards the Bull Point on the West End of Rathlin, hoping that the tide would carry them down into Church Bay.
After landing on the Island, Sam and his uncle explored all the roads on the Island before stopping for pictures at Ushet Lough, from memory I don’t think the car was tried on the lough but it then stopped for more pictures in front of a small Thatched Cottage in Kinramer on Rathlin’s upper end.

For more on this see the Ballycastle Chronicle