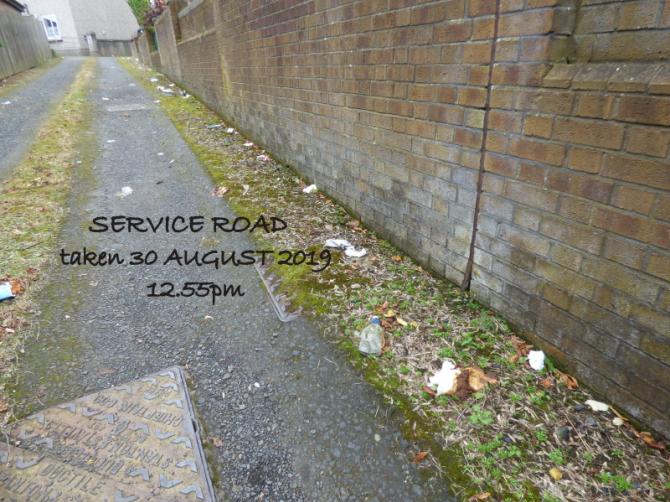 A BALLYCASTLE resident has slammed those behind a vile act which left human excrement on the path behind her house near Leyland Lodge in the town.
Sheila Blane said human faeces and underwear had been left down a side street which runs behind her house following the Lammas Fair weekend.
Speaking to the Chronicle, Sheila said she was 'horrified' that she and her fellow neighbours had to face this for a prolonged period of time.
Speaking to The Chronicle on Friday she explained: “Because the car park attached to our houses is a public one, Council requires us to vacate it over the time period of the Lammas Fair.
“The library staff were very kind and let us park there, but to return to our homes we had to use a small service street.
“You can imagine our surprise when we came across human filth, including toilet roll and a pair of underwear!
“There's no excuse in this day and age for people to be this vile.
“It was adult female underwear, not a child's which may have been more understandable that a child couldn't hold on, but I'd still like to think there would have been some effort made to clean it up!
“Anyway, we thought Council would have cleaned it up following the fair when they were out bright and early cleaning the streets, but it's been there all week.
“Today is Friday, the fair was over on Tuesday night and the rest of the streets were cleaned on Wednesday morning, however I can't even open my kitchen window without the smell of human excrement wafting in. It's totally disgusting.”
The Chronicle contacted Libraries NI and the Education Authority who is responsible for the ground surrounding libraries.
Libraries NI said they sent someone to check the grounds but they  could ‘find nothing’.
Sheila added: “I have lived here for 13 years and we have always had to move our cars for the Lammas Fair so the stallholders can use the car park and we have never once complained.
“But this is a step too far. When members of the public don't have any respect for the people who live here all year round it's time the toilet issue was looked at.
“When I was speaking to the police on both days of the fair, people came up and asked whee the toilets were at that end of the town and they were directing them to the hospital! That surely couldn't be right either. But I am certain nobody was directed down the service street that we had to use to return to our houses, I feel very let down!
“The fair was very badly managed to begin with and this is just another thing to add to the long list! I am more annoyed that of all the bodies we have contacted that nobody will take responsibility for the service street and the dirt remains just lying there!”