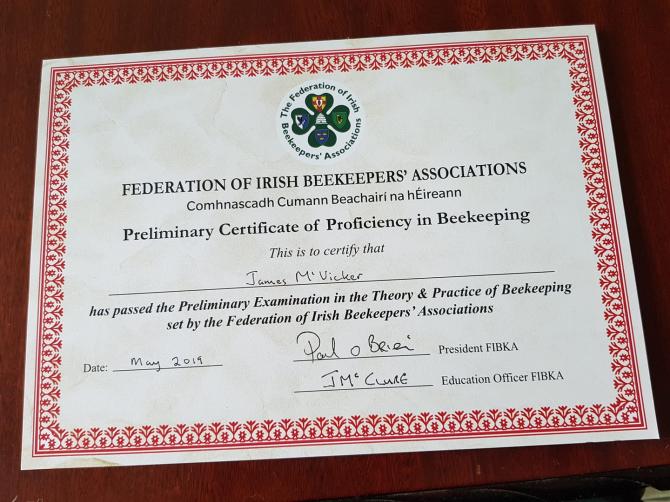 James McVicker received his certificate from the Federation of Irish Beekeepers’ Associations after completing a course in Cullybackey.

“IF the bee disappeared off the face of the Earth, man would only have four years left to live” - was a phrase said by the legendary Albert Einstein.

This remark was echoed by James McVicker who recently completed a Preliminary Beekeeping Course hosted by Greenmount college in Cullybackey, in conjunction with the UBKA.

Speaking to The Chronicle, James, who lives at White Park Bay, explains that he completed the course due to a long-term fascination with bees, as well as wanting to help the environment along the way.

“The course is run by the UBKA which is an umbrella association made up from three representatives from each of the local associations with CAFRE dealing with the paperwork,” he said.

“I am from a farming background and have always been interested in nature. I lived in a city in England for six years and during that time I seen very few green fields.

“When I moved back to Northern Ireland last year I was keen to get back to helping the environment. Bees have always fascinated me as they do such an important job but have often been forgotten about.