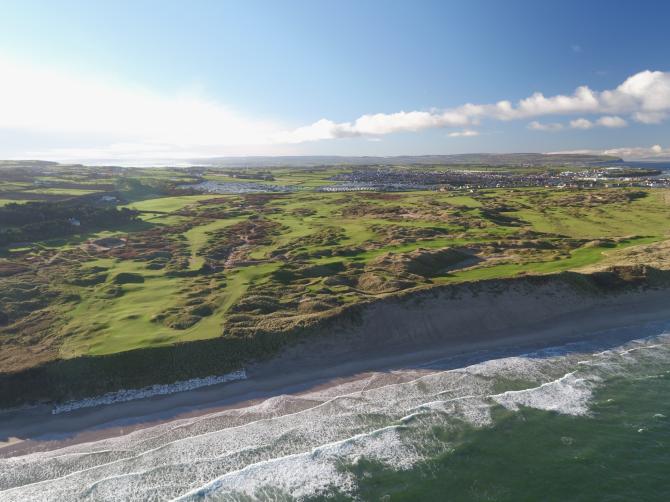 Portrush is gearing up for The 148th Open next week.

THE R&A and Sky Sports have extended the agreement for the award-winning live coverage of The Open through to 2024.

The Open, golf’s original championship, and the only men’s major championship played outside of the United States, will be part of a comprehensive schedule of live golf shown by Sky Sports, including more than 100 tournaments in 2019 with all four men’s majors, all five women’s majors and the Solheim Cup.

The announcement today, extending The R&A's relationship with Sky Sports for a further three years, means golf fans can look forward to even more great moments from the globally renowned championship.

The agreement also covers the AIG Women’s British Open and the Senior Open presented by Rolex as well as The R&A’s prestigious amateur events including The Amateur and Women’s Amateur championships, the Walker Cup and Curtis Cup.

Martin Slumbers, Chief Executive of The R&A, said, “The Open is one of the world’s great sporting events and is watched by many millions of viewers around the globe. Our partnership with Sky has helped us deliver BAFTA-winning coverage of The Open and present the drama and excitement of the Championship from the opening shot to the closing putt in a dynamic and entertaining way. We look forward to working with them to continue to improve and elevate the coverage of The Open and our other professional and amateur championships in the years to come.”

Sky Sports Managing Director Rob Webster said, “The Open is an iconic moment of summer sporting brilliance and over the past three years Sky Sports has elevated the coverage to new heights.

“We’re delighted to continue our partnership with The R&A until 2024. We respect the history and traditions of The Open but know that together we can keep finding new and innovative ways to help tell its stories.”

Sky Sports first broadcast The Open in 2016 from Royal Troon, winning a BAFTA for its coverage across a dedicated channel which included the first tee shot live for the first time and the hugely popular Open Zone delivering insight from the world’s top players on the practice ground.

Henrik Stenson triumphed over Phil Mickelson in an epic Sunday encounter in 2016. The following year, Jordan Spieth produced a dramatic closing run at Royal Birkdale to lift the Claret Jug for the first time. Then at Carnoustie in 2018, Francesco Molinari, saw off the challenge of a stellar chasing pack, including Justin Rose, Rory McIlroy and Tiger Woods, to become The Open’s first-ever Italian Champion Golfer of the Year.

Sky Sports customers can enjoy live coverage in HD via Sky Q, while NOW TV lets viewers watch live sport online without a contract, making The Open easily accessible to anyone with a connected device. NOW TV can be watched anytime, anywhere on the web or on over 60 devices with the mobile or tablet app.