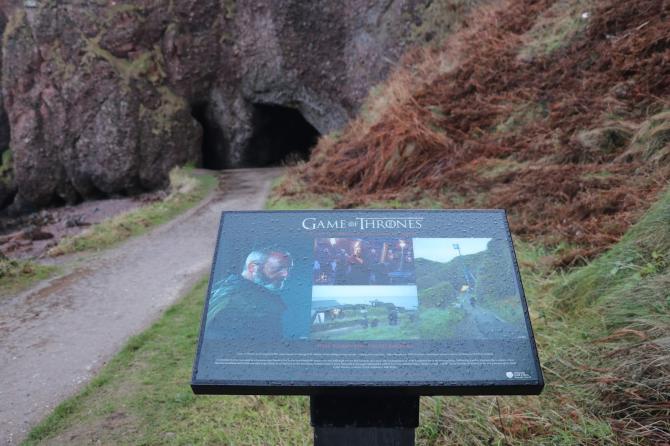 SDLP councillor Margaret Anne Mc Killop has slammed those behind the vandalism of information panels at Cushendun Caves.
The caves, first seen in Season Two of HBO Series Game of Thrones, is best known known as the chamber beneath Storm's End where Melisandre gave birth to a shadow baby.
Cllr McKillop said she was left feeling “angry and disappointed” when she saw the recent destruction to signage at the site.
She told The Chronicle: “Cushendun Caves was one of the locations where interpretations signs were installed at the end of filming in the area.  I was gobsmacked when I visted the caves recently and the panels had been destroyed with graffiti containing expletives.
“There are bus loads of tourists going in and out of those caves daily, Game of Thrones fans who want to take photographs and say they've been to the caves.
“What a poor reflection of Cushendun it would give when they see the graffiti daubed on the panel.
“The signs, a result of a partnership between Causeway Coast and Glens Borough Council and NI screen, were originally to encourage tourism and visitors to the area.
“We want them to know they're welcome here to appreciate our landscape and our tourist hotspots, but the wording daubed on the sign would not have been a nice welcome for any Game of Thrones fan.”
The panels contained information on the scenes which were filmed at the cave as well as photographs from the scenes.
Cllr McKillop added: “The signs were there to inform tourists as well as locals of the links the caves had with Game of Thrones.
“We should be proud that NI and in particular our beautiful Causeway Coast and Glens Coastline was chosen as a location for filming we should be promoting this rather than vandalising expensive signage.”
A Causeway Coast and Glens Borough Council spokesperson confirmed that they had received a report of damage caused in the area and that a new information panel had been received and was ready to be installed.