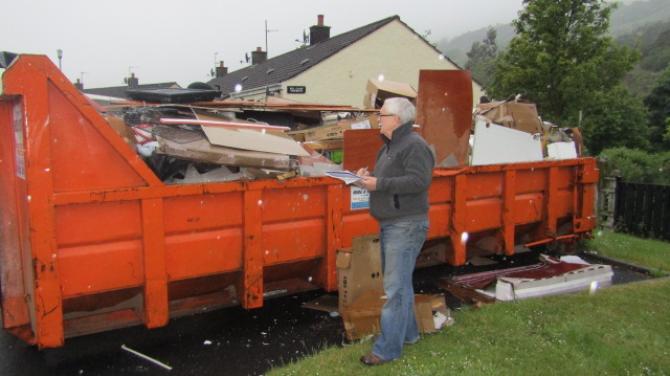 SINN Féin Councillor for the Glens, Oliver Mc Mullan, has called on the Housing Executive to appoint a new contractor to complete renovation works in family homes in Waterfoot after the contractors who were undertaking the work were placed into administration.
Dixons Contractors Ltd, based in Dunloy, had been serving the Housing Executive for over 30 years and carried out work in Executive properties across the borough.
Following the announcement the Housing Executive vowed to work closely with the appointed administrator.
Speaking after visiting residents homes in Carneil Park during the week Cllr McMullan said: “Residents homes which were in the process of being renovated have been left unfinished with the building contractor having gone into administration.
“People have been left with little or no clarity as to when renovations - which include the removal of asbestos - will be completed.
“Instead an overflowing skip and debris left at the back of houses remains, causing a potential safety hazard, particularly for children in the estate. The Housing Executive need to appoint a new contractor urgently.
“I have requested for the Housing Executive to accompany me to the estate to see for themselves the issues requiring a resolution.
“I will continue to engage with the relevant authorities to secure a resolution for residents."
Sinn Féin MLA Philip McGuigan said this news was a complete shock to the community and the whole area.
He said: “It is a terrible blow to the local economy in Dunloy and the wider North Antrim area. Dixons Contractors have been part of the fabric of this community for 40 years and have not only been a major employer to lots of local people but have also been major contributors to many local sporting and community groups and organisations.
Speaking to The Chronicle, a spokesperson for the Housing Executive said they were sad to learn of the administration of Dixons Contractors.
They added: “Dixons Contractors Ltd has been a long-standing construction firm serving the Housing Executive for over 30 years, and its insolvency will undoubtedly have an impact on its employees, the wider supply chain and to our tenants where work is ongoing or to be undertaken.
“The company holds a number of planned maintenance contracts in our North region which includes the fitting of new kitchens and bathrooms. Our immediate priority is ensuring that, where work has started, it is completed with minimal disruption for our tenants, and this process has already commenced on around 30 properties.
“With regard unfinished schemes commissioned to Dixons Contractors Ltd, the Housing Executive will now work closely with the appointed administrator and put in place the necessary contingency measures to see this work is completed as soon as possible.”