Five in a row? 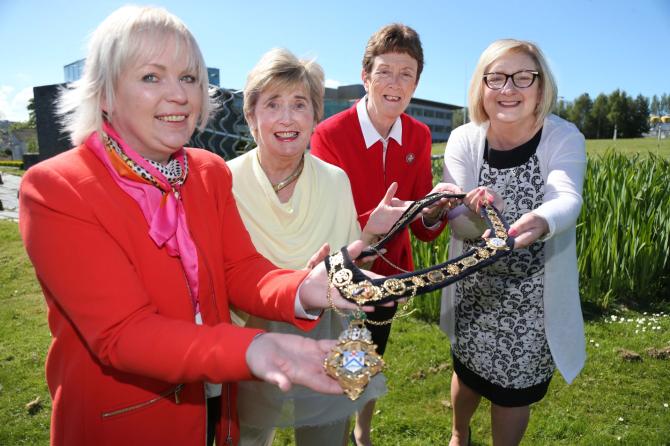 CAUSEWAY Coast and Glens Borough Council is the only one of the 11 council areas to have had a succession of female Mayors.
Causeway Coast and Glens Borough Council has had four consecutive female Mayors since its inception in 2015.
The four female leaders have each had successful terms in highlighting, promoting and praising the borough with each describing their duty as a ‘great honour.’
The Mayor has a number of responsibilities including encouraging and supporting all aspects of life in Causeway Coast and Glens by attending civic and public events, receiving distinguished guests to the borough and promoting the area as a tourist destination.
The present Mayor Cllr Brenda Chivers Sinn Fein who stands down as Mayor tonight (Tuesday) said:  “ I was a Mayor for all, my main ambition was to bring everyday people into my Parlour and the Council chambers to show the engagement between council and its people.
“Many people feel disengaged from council and I have worked tirelessly to resolve this. I attended over 500 events in the CCGBC.  I was a former Mayor of Limavady Borough council.
“ During my term I met Prince Charles and Princesses Anne from the British Royal family as the borough’s first Sinn fein Mayor.
“I brought all creeds and classes to the council and attended events for everyone.”
She added: “We celebrated pride week in the council and I also was the first Mayor to launch the Easter Lily at the council offices at Easter.
“I have really enjoyed representing the people of this borough and feel honoured to have had the opportunity to do so,” she  said.
Councillor Michelle Knight –McQuillan was the first Mayor of the new Causeway Super Council.
The DUP party member said: “Female representation was about 25 per cent on CCGBC, my goal as the super councils first Mayor was to try to bring the four council areas together.
“It was like bringing people together to make a patchwork quilt,” she admitted.
“As a matter of fact that’s what we done we made a patchwork quilt to show togetherness of the areas that made up this council at the end of my term in office.
“I wanted to make sure that I was as inclusive as possible by attending as Many functions as possible and varied to include community, sport and business. It was essential for me to bring the four former councils together as One which I believe I contributed to and helped build, by visiting and reaching out to as many groups and people as possible.”