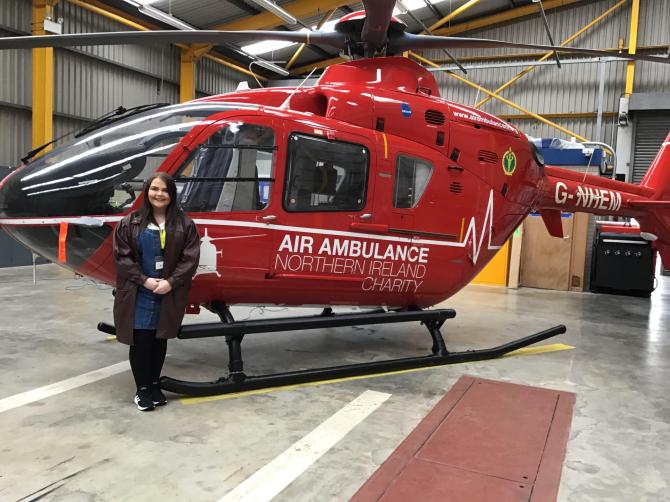 BACK in July 2018, local woman Rebekah Jones was on her way to work when she was involved in an road traffic collision just outside Saintfield.

Rebekah, who lives in Bushmills, normally travelled to work with colleagues but on the day of the accident she was by herself in the car when she collided with a lorry.

A member of the public travelling behind Rebekah stopped her car and called 999.

Speaking afterwards, Rebekah said: “I remember everything about the incident. I could see the collision was going to happen, so I slammed on my brakes. I made the decision to try and veer my car into the wall on the side of the road, impacting on the passenger side since there was no one travelling with me. I closed my eyes as the impact happened and I just had this intense feeling of being thrown back.

“Afterwards I was afraid to open my eyes, I thought I could be dead. Once I did, I realised my car door wasn’t there, it had been crumpled back. I tried to get out of the car and that’s when the intense pain kicked in and I felt the blood around my legs.

“My training as a physio kicked in and my first thought was to wiggle my toes to make sure there was no spinal cord injuries.

“I could see that I had an open fractured femur, but I did not know the extent of my other injuries. I was so thankful to the woman who stopped and stayed with me until the ambulance and air ambulance arrived, all I could think was I didn’t want to die alone.”

When the air ambulance team arrived on the scene, the HEMS paramedic and HEMS doctor gave Rebekah pain relief, due to the intense pain she was in, and prepared her for transport to the Royal Victoria Hospital, where she remained for two weeks.

Along with the open fracture on her leg, Rebekah also had spinal injuries, a fractured cheekbone, serious concussion and her kneecap had been shattered.

The injuries to her kneecap were so extensive that it had to be removed.

Rebekah has since undergone intense physiotherapy, something she knew would be vitally important for her discharge from hospital and recovery.

For more read this week's Chronicle