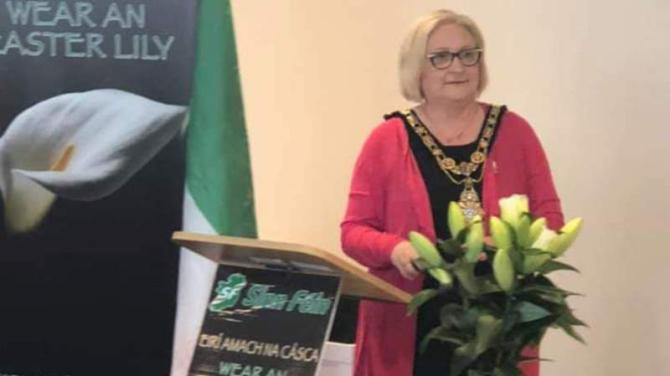 An Easter Lily launch hosted by the borough's Sinn Féin mayor at council HQ has prompted outrage from unionists.

The event was attended by Sinn Féin politicians and candidates, as well as “republican activists and family members of the patriot dead,” according to the party.

The DUP's Aaron Callan said it proved Mrs Chivers had failed the inclusivity test she set for herself after taking office.

“As first citizen of this borough she should represent all and she said back when taking up office that she would do this.

“However, she has fallen short of those commitments yet again. She made sure she was out of the Country when Armed Forces Day occurred in Coleraine, was absent both at Remembrance Day events and the Air Show where the RAF were present.

“Now she organises a pathetic pre-election stunt in the council offices for the failed Easter Rising.”

PUP Councillor Russell Watton says he has lodged a complaint with the local government ombudsman.

“This disgraceful misuse of council property was nothing more than a political stunt.

“The gathering was held to eulogise the IRA by a mayoress who told the public that she would be 'a mayor for everyone'.”

Speaking at the event Mayor Chivers said: “Easter is the most important date in the Republican calendar; it is a time when we gather right across Ireland and beyond, to remember and commemorate those men and women, throughout the generations, who gave their lives in pursuit of Irish freedom and independence.”

She continued: “Sinn Féin want a reconciled and united Ireland where everyone's rights and identity are respected.

“The upcoming local government elections are a chance for the people of the Causeway Coast and Glens to help return a stronger Sinn Féin team to forward the progressive politics of equality, rights and Irish unity.”