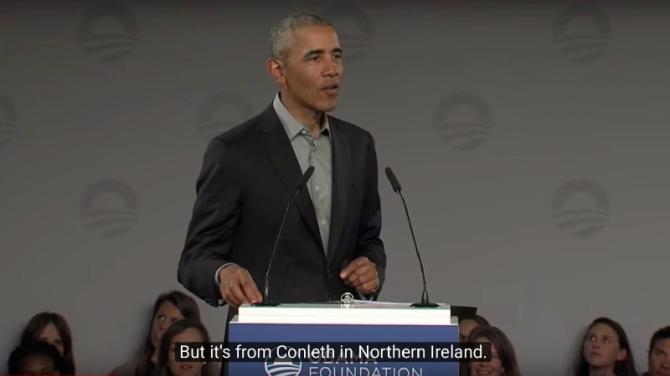 IT’S fair to say that it’s not often that you get a question answered by the former President of the United States of America.

However, Conleth Burns, who hails from Armoy, had that experience recently as a question pitched to Barack Obama was heard by millions of people across the globe.

The 21-year-old, who studies law at New College, University of Oxford, spoke to The Chronicle to explain his interest in politics and how being involved in the Armoy Community Association has helped to bring those from different sides of the political divide together for a better future - something which he hopes can be replicated across Northern Ireland.

“I’m currently preparing for my law finals and I was at home for a break and was catching up on the Brexit crisis of the day,” he said.

“For a number of years, I’ve volunteered for Armoy Community Association and have seen the real value in people coming together and working together.

“I’ve seen how great it is when people from different backgrounds and communities come together and trust one another, become friends with one another and build a new way forward.

“Having been part of that journey of building trust and moulding consensus, I find it frustrating when our leaders aren’t doing that, especially when you can see like I have in Armoy, the real benefits in bringing people together.”

Conleth was on his way back home to Armoy when he was tasked to ask a question to Obama, but despite remaining hopeful that it would be read to the former President, he felt it wouldn’t be answered.

“For some time, I’ve been on the mailing list for the Obama Foundation. I was flying home for a bit of a revision break and got an email: Do you have a question for President Obama?

“I sent off my question: ‘as young people across Europe, how can we show the value in compromise and the beauty in consensus’?

“To be honest, I didn’t think it would be answered. I thought there’d be loads of questions to be read out.

“The team from the Obama Foundation quickly responded and asked if I could send a video of my question, so I sent it off, but didn’t tell anyone because I didn’t think it would be answered.”

However, to his amazement, Conleth sat and watched the former President take 10 minutes to answer his question on compromise and consensus.

“Next thing I know, I’m watching the Obama Town Hall Europe and the 44th President of the USA spent 10 minutes answering my question about compromise,” he added.

“It was a bit unreal, to be honest. I remember vividly, now more than 12 years ago, the day when Obama’s candidacy for President was announced.

“I think it awakened in many young people of my generation a new kind of politics that he represented.

“I stayed up all night on his election night and remember the history of that moment in the 2008 election.”

So, what can Conleth take away from Barack Obama’s response?

“I think there is lots to unpack from the answer and it wasn’t an easy question and the answer is challenging as well,” he concluded.

“He invites us to refine and reflect on our core values and principles as the basis for bringing about necessary and sustainable compromises in the challenges that we face.

“This is the only option, he says, as there is no exact formula to make these very challenging choices.

“I think the most challenging aspect of his response was that we all have this responsibility as citizens to reflect on the values that are important to us and compromise from that basis.

“So when we see a Brexit impasse, or a Stormont stalemate, we have to take responsibility for our job in urging our leaders to compromise, and being prepared to make those compromises ourselves, consistent with the values we have reflected on.”