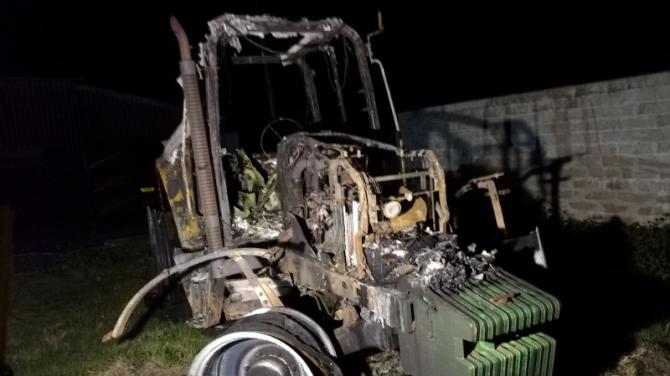 A FARMER has been left counting the cost after losing his tractor and JCB to bungling ATM thieves who fled after their haul fell off the getaway vehicle.

In an exclusive interview with The Chronicle, the Bushmills man said he was among the “forgotten victims” of the on-going crime spree.

Bushmills village centre was sealed off last Tuesday morning after an ATM in the Market Square area was ripped from the wall. Those behind the audacious heist left a trail of destruction, causing extensive structural damage beside Ground Café before torching the tractor and the digger.

It is the eleventh incident this year that thieves have struck across Northern Ireland, stealing 12 individual cash machines.

The Chronicle understands that the Bushmills ATM, which toppled off the getaway vehicle as it sped along the Ballyhome Road, contained £100,000. PSNI officers later recovered the machine but have refused to say whether the contents were intact.

Two hours before the cashpoint was ripped free, thieves drove a John Deere and a JCB telehandler off a small farm holding five miles on the Ballycastle side of the village.

The tractor was then taken to near Dunluce Castle where it was hooked up to a trailer, and a Hitachi digger loaded on to it, before returning to Bushmills. Once the ATM had been successfully dislodged, it was scooped up by the JCB and carried a short distance to the getaway vehicle. So far, police have made no arrests.

The loss of the tractor and telehander has been valued at tens of thousands of pounds by its owner. Wishing to remain anonymous, for fear of reprisals by those involved in the recent raid, he said he had been left feeling “violated”.