'I've been pushed and punched'- Consultant 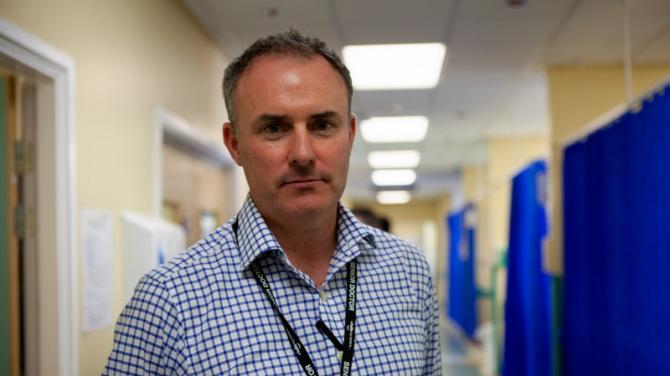 AS well as witnessing abuse from patients and their relatives in the emergency department, Dr Dunn, who is Causeway Hospital's Clinical Director for Medicine and Emergency Medicine, has also been assaulted during his career.

He said: “I've been pushed and punched; I've also seen life-saving equipment smashed which ultimately could have put patients' lives at risk.

“Most abuse in the emergency department is verbal with the majority of physical assaults on the wards. Around half of ED incidents are fuelled by alcohol and drugs.

“The problem is under-reported, particularly in ED, because there is an assumption that it is just part of the territory and something you just get on with. We have all witnessed episodes which haven't been reported.

“If you work in that sort of environment you almost expect abuse which is completely wrong, when you are already at the sharp end and have enough to deal with.

“Abuse affects staff and contributes to sickness levels which leaves us short-staffed. Some staff have to go off shift and that inevitably affects the department and how it runs.”

Dr Dunn, who is in charge of around 50 medical staff, added: “When the department is very busy people have expectations of the service which we can't meet.

“They get frustrated over prolonged waiting times and sometimes take it out on the staff which is totally unacceptable.

“It's mostly verbal; tempers flare if people are kept waiting but it is because someone else can't wait. Waiting times are falling at Causeway Hospital but, during particularly busy periods, we try to explain why they are long.

“We have a separate stream for minor injuries to try and get patients seen more quickly by an emergency nurse practitioner.

“Unlike other hospitals, Causeway has two really busy periods; not just the winter months but also the summer season, when the population on the North Coast more than doubles. It is just as challenging then.

“Abuse stemming from alcohol or drugs can happen at any time of the day; we used to see a spike at weekends, but that's no longer the case. Higher attendances in the ED reflect the growing problem of drug and alcohol abuse.

“It only takes one agitated or aggressive drunk person, or someone who is under the influence of drugs, to make it an incredibly difficult environment to care for other patients in. It impacts on the other patients and can make the experience in ED even more distressing than it needs to be.

He said: “We have a good relationship with the PSNI and meet them on a regular basis; officers respond very quickly to incidents.

“There is a core group of patients who cause us difficulties, repeat attenders with the same issues. Some people are too aggressive to be treated but we will see everybody and balance the delivery of care with the fact that we have to keep our staff safe.

“People who abuse alcohol and drugs have their own problems and are as worthy of our care as everyone else. But our staff have the right to carry out their duties free of threat.”

Dr Dunn stressed: “We see 50,000 people every year and the vast majority show us respect and understand that we are doing our best in a very difficult situation.”