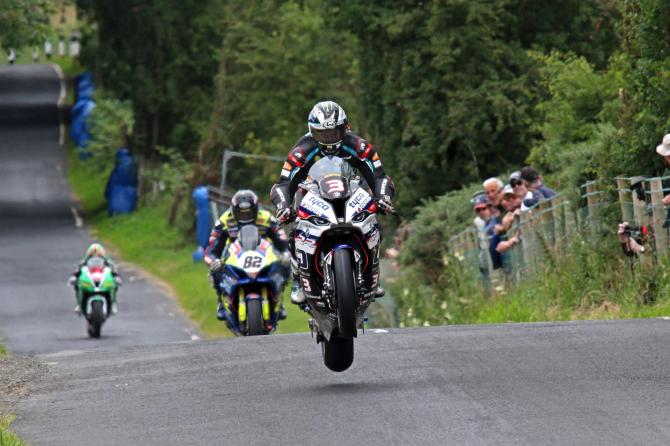 BALLYMONEY'S Michael Dunlop has been passed fit to compete in this year's Ulster Grand Prix after passing a medical ahead of tomorrow's (Wednesday) opening practice sessions.

Recently, a post on social media hinted that Dunlop's season was over after an image emerged of Dunlop's right arm in plaster after supposedly aggravating a wrist injury after his heroics at the Armoy Road Races at the end of July.

The 19-time Isle Of Man TT champion won both Superbike races at Armoy in dramatic fashion given that he was still recovering from a multitude of injuries sustained during a crash on the exit from Castletown Corner at the Southern 100 last month.

In a statement, Ulster Grand Prix Clerk of the Course Noel Johnston said:

"After he sustained injuries in a crash at the Southern 100 on 11 July, the UGP organisers wanted to be certain Michael would be fit to ride.

"A medical examination by a doctor from the MCUI Medical team was requested and carried out on Monday.

"Michael has passed that and will line up for practice on Wednesday morning on his Tyco BMW."

There is yet another star-studded line-up set to dawn the tarmac at Dundrod this week with Messrs Dean Harrison, Peter Hickman, Conor Cummins, Davey Todd, and Lee Johnston just some of the riders who will be battling with Dunlop for honours this week.

With UGP bike week now well and truly underway, road racing fans are in for a treat with racing scheduled on Thursday before Saturday's main event at Dundrod.