Derek McGee on the victory trail after clinching Armoy honours 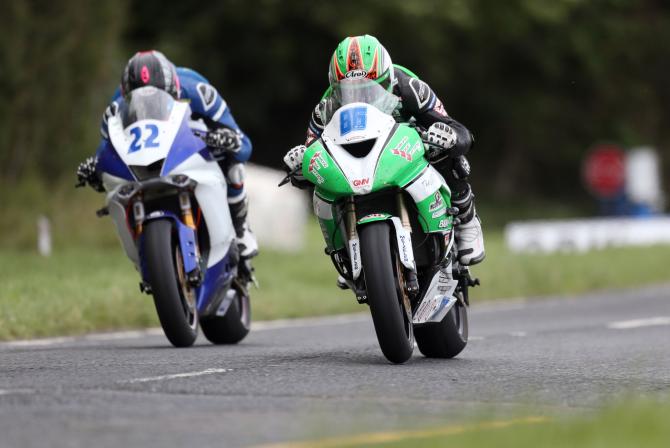 Mullingar rider Derek McGee says that he is hoping that victory in this evening’s opening Supersport victory at the Armoy Road Races will lay the foundations for further success in tomorrow’s main event.

In controversial circumstances, McGee clinched victory by just over 0.001 seconds from Magherafelt’s Paul Jordan, with reports that the pair collided at the chicane following the chequered flag.  Michael Sweeney rounded out the podium positions with Michael Dunlop, Darryl Tweed and Mike Browne from County Cork completing the top six.

In what was a scintillating evening of racing, McGee spearheaded the freight train throughout the seven lap race with the usual suspects all in pursuit of the B&W Diamond Edge Racing Kawasaki. Paul Jordan, Michael Sweeney, Derek Sheils and Michael Dunlop took the fight to McGee in the opening stages before Sheils slid off.

Speaking to Chronicle Sport after his opening win on Friday evening, McGee said that he was “pleased” to get the win.

“I was steady enough all day and I was glad to get the win,” admitted the Mullingar man.

“We made a few changes to the big bike because we were struggling a little bit but the Supersport bike was going well and I was pleased to get the win.

“I’m still not feeling 100% after my crash at the Isle of Man TT because I feel a little stiff on the bike but I should get there soon enough.

“Conditions were almost perfect tonight because the wind died down and that made it better for us especially on the run to the line,” he said.

“Hopefully if conditions stay as they are the fans will be treated to a special day tomorrow to follow on from tonight’s action.”

Earlier in the evening local favourite Tommy Henry cruised to victory in the opening Senior Support class ahead of Ballymoney’s Ryan Fenton who was making his Armoy debut this year. Andy McAllister crossed the line in third ahead of Dermot Cleary and Daniel Ingham as Garvagh’s Darryl Anderson completed the top six.

Friday night’s action has whet the appetite for the race fans who turned out in their droves around the Olchan circuit. With some scores to settle thoughout the classes tomorrow’s action is well poised to be yet another memorable ear at the ‘Race of Legends’.

Spectators have been urged to get in position early tomorrow morning as roads are set to close around the circuit at 10am with no less than ten races scheduled for the main bill.