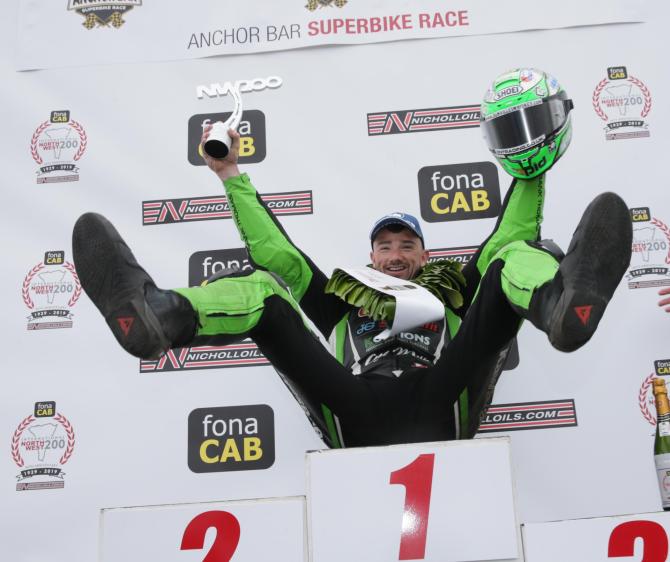 IT was an action packed afternoon at the North West 200 with four races going ahead after a somewhat indifferent start to the day.

Each of the respective classes got out on track to round off the 90th anniversary celebrations; however, deteriorating weather conditions and a lack of visibility around the 8.9 mile circuit meant that the feature North West 200 Superbike was abandoned.

After two failed attempts, the Supersport race got underway at 1.30PM. Despite a depleted grid, the 600cc race did not disappoint the spectators that braved the elements and delays. Mullingar’s Derek McGee battled up front with the Milenco Honda pairing of Davey Todd and Conor Cummins. Magherafelt rider Paul Jordan steered the Logan Racing Yamaha to fourth with Christian Elkin completing the top five.

In the Superbike class, Glenn Irwin pipped his Quattro Plant Kawasaki team mate James Hillier to the post as Irwin launched a great move into the Juniper Hill chicane on the last lap to clinch the win. Hillier competed in the Superbike class on his Superstock machine and the ZX10R-R machine proved fit for Irwin’s superior package. The front three fought tooth and nail around the Triangle for the four laps but Irwin proved why he is the man to beat in the premiere class in the end.

It was a frustrating week for North West 200 record wins holder Alastair Seeley. A crash on Thursday night set the tone for proceedings and after machine trouble in the Supersport race earlier today, Seeley’s challenge rested on the Superbike class. The Carrickfergus rider pushed the PBM Ducati but a lack of grip hampered his chances of running at the sharp end. This was the first year since 2008 that Seeley has failed to win around the Triangle.

North West newcomer Richard Cooper finished sixth in the Superbike class but his best result came in the Superstock class as he registered a strong second place finish in his debut at the event. James Hillier was the runaway winner in the race leaving Cooper and Davey Todd to battle it out for the best of the rest. Glenn Irwin was also in the mix but he dropped back towards the end of the race.

Pre-race favourite Peter Hickman failed to follow up his success last Thursday as he retired from the race citing that the deteriorating conditions were becoming too dangerous to continue.

Jeremy McWilliams capped off a frustrating week with a win for KMR Kawasaki by winning the final Supertwin race from Christian Elkin and Michael Rutter. Matthew Rees and Joe Loughlin rounded out the top five in what proved to be the final action of the day.

Read all the reaction from the paddock inside The Chronicle which will be available on Tuesday.