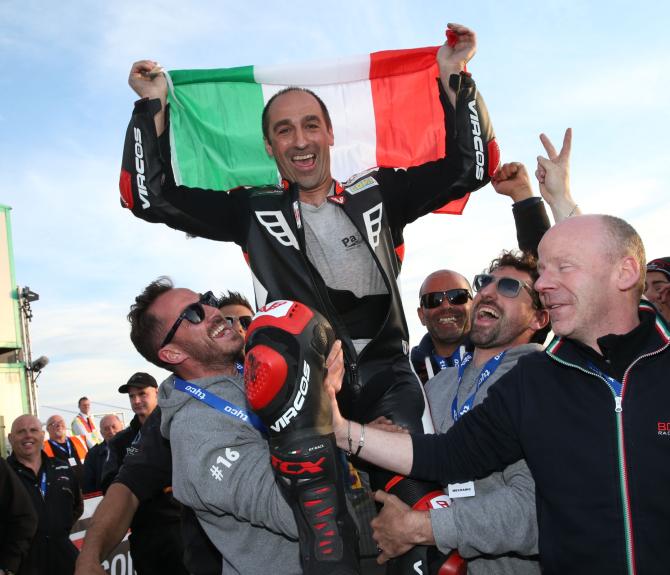 IT proved another breathtaking night of racing on the sun kissed north Coast as racing got underway at the International North West 200.

Lee Johnston clinched victory in the opening Supersport race whilst Peter Hickman grabbed top honours in the Superstock race. Stefano Bonetti registered his first victory around the Triangle, becoming he event's first ever Italian winner in the process.

North West 200 record wins holder Alastair Seeley and Lee Johnston were locked in battle at the front of the six lap Supersport race as James Hillier, Dean Harrison and Paul Jordan were all in the mix as well. It was a typical slipstreaming 600cc race which proved a massive hit with the fans that turned out to watch the wheel-to-wheel racing.

It was Johnston and Seeley though who led that train on to the coast road on the final circuit, with Seeley going for the winning move as he has so many times before at Juniper chicane. He got his nose in front, but carried a little too much speed, running wide on the entry before touching the grass and tumbling off the EHA Racing Yamaha. This presented Johnston the win ahead of Dean Harrison and James Hillier.

Peter Hickman romped home in the Superstock race onboard the Smith’s BMW. Glenn Irwin came home in second on the Quattro Plant Wicked Coatings Kawasaki in what was his maiden appearance in the Superstock class. Michael Dunlop finished third ahead of James Hillier, Lee Johnston and former British Superstock champion Richard Cooper completing the top six.

In the Supertwin race, KMR Kawasaki rider Jeremy McWilliams initially led the race before crashing out at the Mather’s Cross chicane, to cap a frustrating day for rider and team.

Jamie Coward was in hot pursuit of Bonetti, who was on the lightning fast Paton, towards the end of the race but Coward failed to halt the charge of the Italian rider. Michael Rutter finished in third as James Chawke, Horst Saiger and Francesco Curinga completed the top six.

It is yet another action packed schedule tomorrow with five more races scheduled to take place.