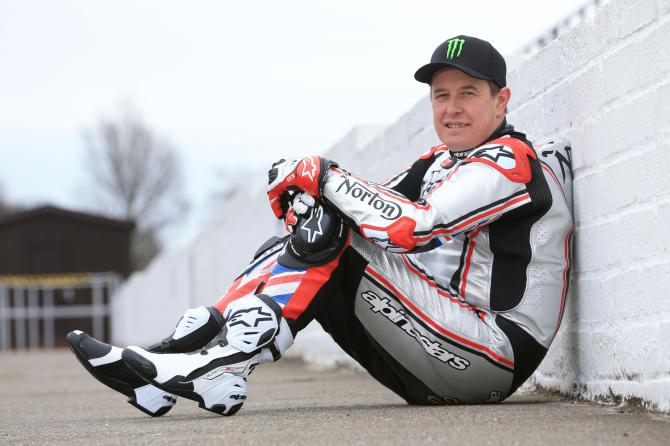 John McGuinness is excited ahead of his road racing comeback

AFTER months of speculation, International North West 200 race organisers have confirmed that Norton will make their long-awaited return to the event next week with John McGuinness at the helm.

Norton had hoped to run their new V4, 1200cc engine in the SG8 superbike at the Coleraine and District Motor Club meeting, as well as the TT, but the regulations prohibit machines of more than 1000cc capacity from taking part.

In light of this, Norton has now returned to the 1000cc V4 Aprilia motor which it had been using previously.

"It has taken a lot of sorting out, but it has all come together at the eleventh hour," said a relieved McGuinness, who has missed the previous two North West 200 events. In 2017, he crashed during practice, with 'McPint' still recovering from the injuries the following season.

The Morecambe racer has been hard at work with Norton over the past couple of months, with Rockingham, Bruntingthorpe, Anglesey, Cadwell, Croft, Castle Combe and Oulton some of the tracks he has been racking up the miles.

McGuinness says he is happy with the performance of the Norton superbike after over a decade of racing Hondas.

"I’ve had to be patient and it has been a long wait but now I can’t wait to get stuck in at the North West," said McGuinness.

"I matched the times I did on the Honda when we tested at Castle Combe so the bike isn’t a million miles away.

"The engine is more powerful and the bike has lots of speed and stability. The team is good, the tyres are good and we have been doing the work.

"I haven’t raced at the North West since I snapped my leg in half two years ago but I am going into the event with an open mind and I am optimistic we can do OK," he added.

McGuinness also has entries for both the Supersport and Superstock races at the North West 200, but doesn’t have machinery available at this stage.

Event Director, Mervyn Whyte, MBE, said: "‘We are delighted to have John, one of the North West’s longest serving riders, back racing with us in the 90th anniversary year.

"The Norton will also be a huge attraction for local road racing fans who will have the chance to see and hear the superbike on the famous Triangle circuit."