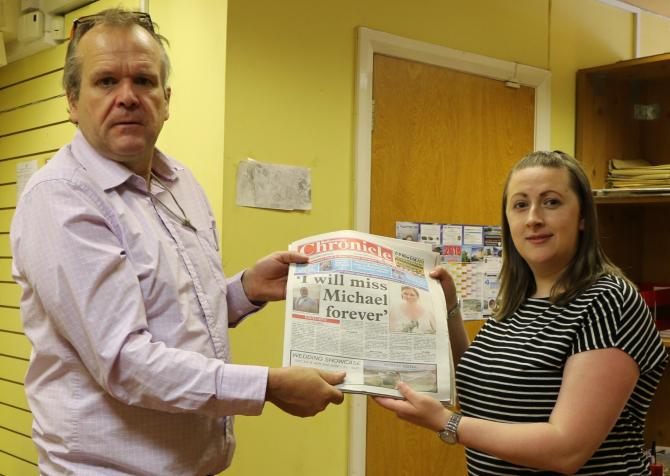 Leslie Jarvis dropped into the Ballymoney Chronicle office last week to pick up back copies of the paper from journalist Alan Millar, containing extensive coverage of the accidents that have occurred

A BUSHVALE woman frustrated at the Department For Infrastructure's (DFI) refusal to erect 'Stop' signs at two notorious Gracehill Road junctions, is set to appeal to directly to PM Boris Johnston over the matter.

Leslie Jarvis, describing herself as “a local person who has got very frustrated about what is going on” is hoping that Mr Johnston will over rule a policy that judges 'Stop' signs to be unsuitable for the Fivey Road and Bregagh Road junctions with Gracehill Road, near Armoy.

Seven accidents have occurred at these junctions known locally as Walkers Cross and Clintyfinnan,within the past year, including one fatality.

Many of the accidents have involved north American tourists, who, may people feel, do not understand what a 'Give Way' sign means.