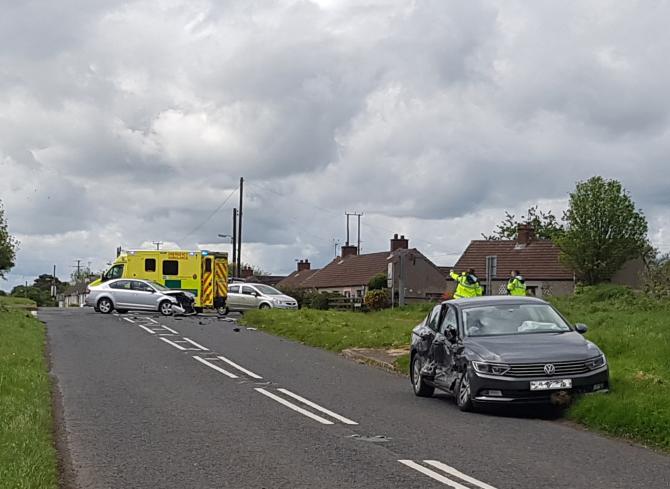 The scene of the last serious accident at the Gracehill Rd/ Bregagh Road junction on May 21. WK2250-K-MY.

A LOCAL councillor has blasted the solution proposed by Road Service to improve safety at one of the most dangerous junctions in north Antrim, as “complex and expensive,” saying that simple “Stop” signs would be better.

UUP Cllr Joan Baird made her comments after the Department for Infrastructure (DFI) have revealed that work on a “priority traffic system” at Gracehill Rd/Bregagh Rd junction near Armoy will begin “towards the end of the summer”.

A DFI spokesperson told The Chronicle that: “This involves reducing the width of the minor roads to restrict traffic flow to one direction at a time.”

This news was welcomed by DUP Cllr John McAuley who said he was “delighted” to have received correspondence about the work which he said “will reduce vehicle speeds on the approach to the junction.”

There have been four serious car crashes, including one fatality, at this Gracehill/Bregagh Road junction at Clintyfinnan since last September and several others at the nearby Walkers Cross.

On Wednesday September 25 last year, a crash claimed the life of American honeymooner Michael Monroe, with further accidents on Friday September 27, Friday March 29 and the latest Tuesday May 21.

Each accident has increased calls for more to be done in respect of road safety with DFI enhancing signage and refreshing road markings at the junction.