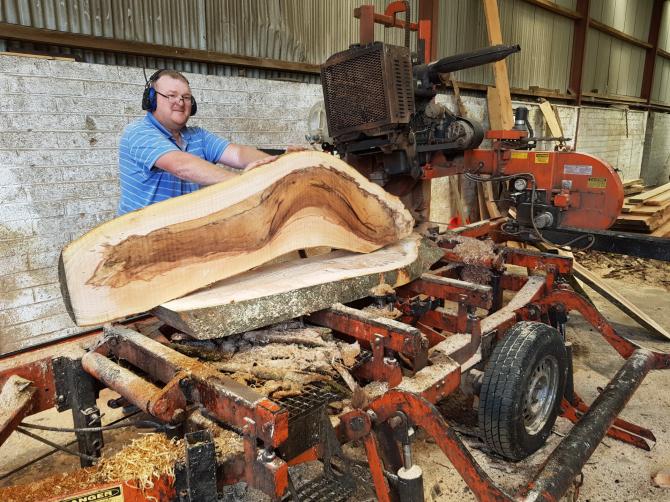 Wood processor Daniel McVicker pictured with part of the beech tree that was once located at the Dark Hedges. SPB29-13.

A FALLEN tree that was made famous by the TV show Game of Thrones has started to be cut with plans to make tourist items and other souvenirs.

The 200-year-old beech that formed part of the Dark Hedges near Armoy came down in a storm at the end of January.

The tree fell on land owned by James Laverty and was sold on privately through Daniel McAllister and Son Auctioneers and Estate Agents in Cloughmills.

It has since swapped the King Road’s for Dragonstone after being purchased by Ballycastle farmer Sean McBride who paid a ‘significant undisclosed’ amount for the item.

What makes the item even more special is the fact McBride’s land in Fairhead was used as a film location by Game of Thrones during the seventh series of the show.

Speaking to The Chronicle, Sean insists the plans are to make souvenirs and tourist items with the fallen beech after being partly cut  at a local sawmill.

“A part of  the tree has been cut, but there is still more than half to go,” he said.

“Daniel has done a fine job so far and he said he’s never seen such a colour in a beech tree before.

“Our first mission is to make a momento for The Hunter Kane and Son Big Abseil for Carey Faughs, which is being held at Fairhead on August 10.

“However moving forward we want to be able create crafts, boards and other items for members of the public to enjoy.