Magilligan: a place of beauty with a passion for football

St. Aidan’s GAA club situated in one of the most beautiful and historic areas in the country 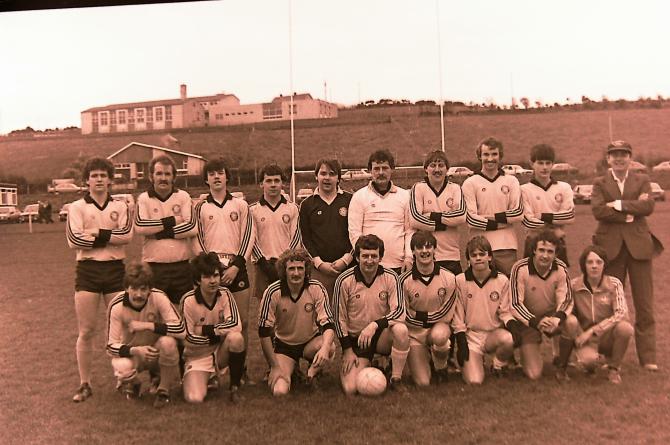 A Magilligan team pic, taken some time in the eighties, most likely at a Neil Carlin Cup final. How many can you name?

ST Aidan's GAA club in Magilligan is situated in one of the most beautiful and historic areas of the country, and has a decent history itself.

Taking its name from the McGilligan's, a branch of the McQuillan clan which once ruled the north coast region, the club properly got up and running in 1938 after a number of previous attempts had failed.

Under the chairmanship of one of the club's founder members, Barney O'Kane, a number of players from neighbouring areas lined out with the club.

Indeed, one of those to play for St. Aidan's was Kevin Doherty, a brother of the legendary NI footballer and manager, Peter Doherty.

Another was Sean Lundy, also from Coleraine, and a member of the famous fruit and vegetable family.

The club enjoyed great success in 1944, winning both the Neal Carlin Cup and the North Derry League, and were a formidable force at local carnivals in the sixties and seventies.

They have produced some great players down the years, none moreso than arguably the most famous of them all - George McGee.

If the late Eddie Butcher was still about, then no doubt a song would have been written in their honour.

The Butcher family has a long association with the club and the area hosts an annual Eddie Butcher Singing Festival.

For now, though, pick up a copy of this week's Chronicle for a full page feature looking at the history and people who make up St. Aidan's GAC Magilligan.