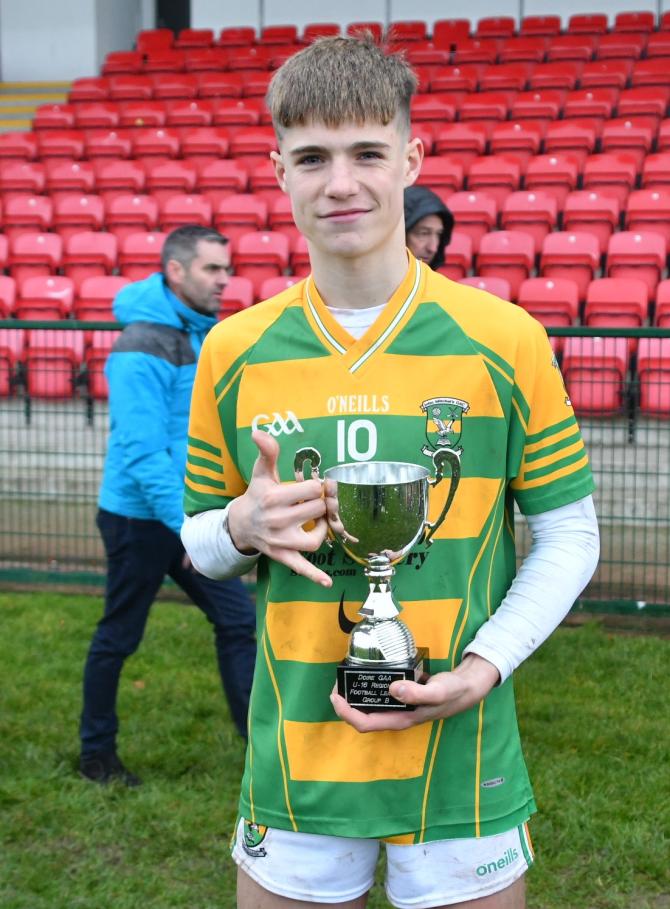 Glenullin's Ryan McNicholl, who starred for Glenullin an earlier Under-16 final. The 'C' final is scheduled for this weekend.

THE final of the Jack Cassidy Cup - played by the stronger Under 21 teams - will take place at Emmett Park, Slaughtneil, at 1pm on Saturday between Dungiven and Kilrea.

These two sets of players have met in Under 14, 16, 18 finals and, now, Under 21 level. The last meeting between them was the Under 18 final three years ago, when Kilrea pulled off a deserved victory against the odds.

Both are in the final on merit, having come through semi-final replays: Kilrea defeated Glen by eight points while Dungiven had 11 points to spare over Ballinascreen.

It is the final game of the season, apart from the under 16C championship which will also be decided on Saturday.

Dungiven have built a pretty strong panel and, with Cahir Higgins in deadly form at corner forward, the Kilrea defence will have to be on its toes.

Paddy Quigg and Daithi McLaughlin are the key men for the Pearses but one of the team's younger members, PJ McAleese, was superb in their replay victory over Glen.

The Jack Cassidy Cup final is always played at Slaughtneil as the late Jack Cassidy was a past and prominent member of the Emmett’s club.

It looks to be a very close contest with maybe Dungiven’s stronger looking subs bench playing a big part.

The under 16C championship final will take place at Owenbeg at 12noon on Saturday between Ballerin and the winners of the semi-final between Foreglen v Ballinascreen B.

On all known form, Foreglen are expected to complete the double. They have beaten Ballerin twice in the league but both games were pretty competitive.

These two teams served up exciting fare at under 14 level so it should be another interesting encounter.

Ballerin qualified for the final a month ago with a narrow win over St. Michael’s after extra time.

Reports in next Tuesday's Chronicle.