Slaughtneil complete hat-trick of All Irelands 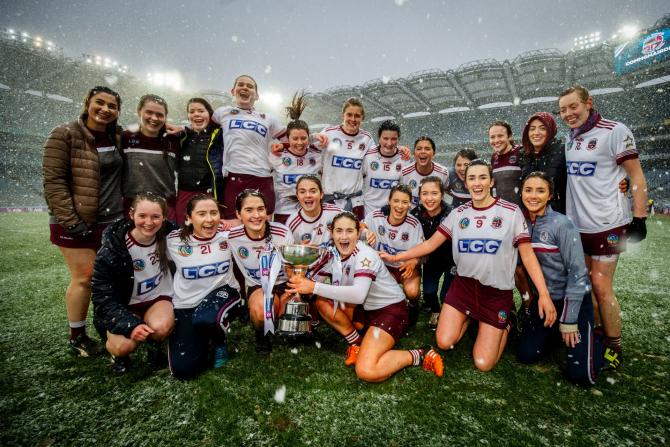 Slaughtneil camopgs celebrate on the Croke Park pitch after defeating St. Martin's Wexford to claim a hat-trick of All Ireland titles.

Tina Hannon scored a goal and six points and was named player-of-the-match for the second year in succession as Slaughtneil completed a remarkable AIB All-Ireland Senior Club Championship three-in-a-row while the snow fell at Croke Park.

The landmark has been achieved by four clubs on five previous occasions, Kilkenny powerhouses St Paul’s managing it twice, but this is the first time a team from a county not operating at senior level has done so.

Frmer Offaly star Hannon might have been the headline act, but she had no shortage of backing with Bróna Ní Chaiside, Aoife Ní Chaiside, Shannon Graham, Louise Dougan and Faoiltiarna Burke among the highlight performers.

Newcomers to this stage St Martin’s probably could have done with a good start but the opposite occurred as Hannon cut inside from the left and shot for point in the fourth minute. She didn’t catch it properly however, and to the horror of four-time Wexford All-Ireland goalkeeping winner and two-time All-Star Mags D’Arcy, the sliotar dropped into the corner of the net.

Josie McMullan added a point soon after and though Emma Codd got St Martin’s off the mark in the 10th minute, Slaughtneil struck five of the next six points, including two classy efforts from play by Hannon and another brace from placed balls, as well as a smart finish on the swivel by Graham.

Chloe Foxe converted a free for St Martin’s and they did have the last say of the half as Linda Bolger raised a white flag from a poor puck out by Joelene Bradley, with the rain lashing down.

That left it 1-6 to 0-3 at the interval and as the rain transitioned into sleet and then heavy snow, Slaughtneil quickly went about putting the game to bed. The weather was not going to stop the confident champions.

Hannon did the needful from a free within seconds of the restart and then fed Aoife Ní Chaiside, who sprang forward from centre-back to split the uprights and put eight between them.

St Martin’s tried all they knew but they needed a goal and Bradley saved Codd’s 47th minute penalty to maintain a stunning record of not conceding a major since the opening quarter of last year’s All-Ireland Final.

Slaughtneil went into protective mode and St Martin’s fired the last three points via Bolger, Foxe (free) and Lettie Whelan but for the third year in a row, there would be no denying Slaughtneil and on this form there could be more to come.

For full report and photos from an historic day in Croke Park, see Tuesday's Chronicle.