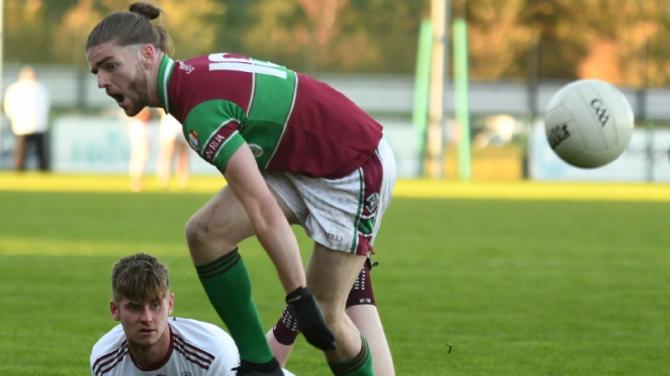 EOGHAN Rua Coleraine and Slaughtneill will have to do it all over again as their Derry senior football championship quarter-final ended all square in Owenbeg last Sunday evening.

In a cracking game a point from Richard Carey in the last minute of normal time brought the sides level for the seventh and last time. This was a top quality game with both sides getting some superb scores as a riveting first half swung one way then the other. After Slaughtneil opened the scoring through Shane McGuigan in their first attack just 30 second in Coleraine then dominated the first quarter hitting six unanswered points in a row.

Colm McGoldrick had levelled matters from a free in the 4th minute; Niall Holly fired over two fine points while Gavan McWilliams converted another two, one from a free, before Colm McGoldrick was on target yet again just eleven minutes in, 0-6 to 0-1 the score. It had been a stunning start by the Coleraine men but Slaughtneil soon showed why they are the four time reigning county champions with an equally assured response.

Four points in a row had Slaughtneil just a point adrift, Christopher Bradley, Padraig Cassidy, Shane McGuigan and Brian Cassidy their scorers. Coleraine needed a response and they got it when Colm McGoldrick pointed a free following a foul on Mark McTaggart. Slaughtneil then went on to finish the half strongly with three more unanswered points, Brian Cassidy, Jerome McGuigan and Padraig Cassidy from a tight angle down the right side, Cassidy’s powerful running from midfield was causing Coleraine problems, 0-8 to 0-7 now the score.

Slaughtneil had a lucky escape just before the break when goalkeeper Antoin McMullen misjudged the flight of a high ball into his square but half forward Meehaul McGrath had got back to gather the ball on his goal line and see it away to safety. Coleraine then had another chance for an equaliser but Liam McGoldrick’s effort just tailed wide.

The second half continued in much the same vein as the first with one side then the other getting on top. Gavan McWilliams stroked over a free just a minute in to level matters but after the sides missed a couple of chances each Slaughtneil moved ahead again with two points from a Christopher Bardley free and a long range Christopher McKaigue effort.

Coleraine needed a score at this stage and they got one, a goal that put them back in front again in the 48th minute. Niall Holly’s long ball in came back off a post, Paul Daly recycled to Liam McGoldrick who blasted to the net. Slaughtneilagain responded in some style to retake the lead with points from Jerome McGuigan and Christopher Bradley.

The crowd of over 3000 were getting full value at this saage as Coleraine yet again came back to level with a Gavan McWilliams point from a free. Then the first incident of some controversy as Eoghan Rua goalkeeper Ryan McGeough was blown up for over-carrying despite being under severe pressure as he tried to exit his square with the ball, Christopher Bradley tapped over the easy free to put his side ahead again going into the last five minutes, 0-14 to 1-10 the score.

It was soon all square again as Liam McGoldrick got forward to point and then the same player was just off target seeking the lead point. With a minute to go it seemed Slaughtneil had nicked it when Christopher Bradley landed a long range point but Coleraine were not quite done as Sean Leo McGoldrick set up Richard Carey to burst through for the equaliser. Going into the three minutes of added time Coleraine looked the more likely to get the winner but twice they just came up short, the sides will have to do it all again and if the replay is half as good as this outing it will be well worth taking in.

The draw for the Derry SFC semi-finals has pitted Ballinascreen against the winners of the Coleraine v Slaughtneil replay while Glen will also have to await the outcome of the replay between Loup and Lavey.