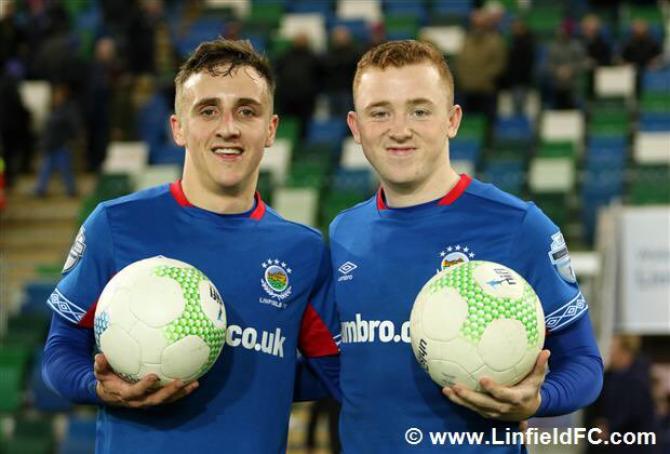 Blues brothers: Joel Cooper and Shayne Lavery both notched hat-tricks in the midweek demolition of Warrenpoint Town. They may not get it just as easy at Coleraine this weekend.

A HUGE crowd is expected to converge on Ballycastle Road on Saturday for the Danske Bank Premiership 'game of the day' when Coleraine host Linfield.

The Bannsiders lead the table on goal difference from Crusaders while Linfield are two points adrift in fourth place but, crucially, with two games in hand.

It has all the makings of a classic, both sides in great form going into the eagerly anticipated game.

The Bannsiders leapfrogged the Crues a week ago with a no frills 2-0 win over Stephen Baxter's men at Seaview while the Blues ran riot against sorry Warrenpoint Town in midweek, eventually settling for a 7-0 win.

However, it's probably safe to assume that David Healy's side won't get things quite so much their own way at The Showgrounds.

Coleraine have yet to taste defeat in the league after 12 games and boast one of the meanest defences, having conceded just nine goals. They are equally impressive at the opposite end of the field where they have racked up 30 goals at an average of 2.5 goals per game.

Saturday's opponents boast almost identical figures, albeit having played two games fewer: they have let in just the eight goals and scored 30, an average of three goals per game.

Now, whether that means Saturday's match is going to be a high-scoring thriller or a dour battle between two dominant defences remains to be seen.

What is certain, however, is that even at this relatively early stage of the campaign the result will have some bearing on the future.

A home win would see Coleraine open a healthy five point gap over their opponents and complete a home and away double over last year's champions.

Defeat for the Bannsiders, however, would see Linfield overtake them at the top of the table, with second-placed Crusaders away to Glenavon in an early evening kick-off.

Whatever happens, Coleraine boss Oran Kearney, who has done such a remarkable job to date in his second spell as manager, is relishing the challenge.

“There are no easy fixtures and the games are brilliant," said the Ballymoney man.

“I said through the week that these are the ones you look forward to in the league and this Saturday will be no different.

“The Showgrounds will be jam-packed and I'm sure there'll be a big atmosphere.

"We got a good result at Windsor Park earlier in the year which gives us confidence.

“It was well documented with them being in Europe and everything else, but they have gone under the radar in the last few months.

“They are slowly but surely creeping their way up the table by winning their games in hand.

“Their form is good and we know that we are going to need the same level of performance as we had against Crusaders if we are to get something out of the game," he added.

* You can keep up to date with developments by following The Chronicle's social media channels and, of course, we will have full reaction and analysis in next Tuesday's paper.