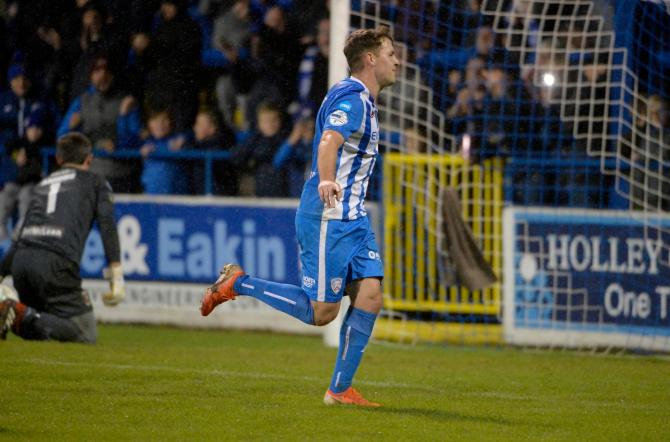 COLERAINE are through to the last eight of the Bet McLean League Cup following a hard-fought 2-1 win over Glentoran at the Showgrounds on Tuesday.

Second half goals from Jamie Glackin and Ben Doherty eased the Bannsiders in front but a late Davidi Nasseri strike made it an anxious final few minutes for the home side.

The Glens, who had young defender James McCarthy sent off in the first half, had two goals disallowed for offside by referee Arnold Hunter and his assistants and, in the end, came up just short.

Coleraine manager Oran Kearney made three changes to the side which defeated Carrick Rangers 4-1 on Saturday.

Aaron Canning returned to the defence at the expense of Aaron Traynor while Jamie Glackin and Alexander Gawne replaced the cup-tied Nedas Maciulitis and Josh Carson who dropped to the bench.

Glens' boss Mick McDermott, meanwhile, was forced to make seven changes due to a combination of suspensions, injuries and international call-ups.

Indeed, his entire strikeforce of Darren Murray, Curtis Allen, Robbie McDaid and Paul O'Neill was unavailable for this game.

Maybe as a result of all the changes, the opening 45 minutes was a pretty lacklustre affair, the main incident of note McCarthy's early dismissal for two ill-judged tackles on Jamie Glackin.

Glackin was proving a constant menace to the Glentoran backline and it was he who opened the scoring midway through the second period, stooping low to guide Ian Parkhill's cross past Glens' keeper Elliott Morris.

The former Dungannon Swifts and Crusaders winger was at it again soon after, playing an incisive one-two with impressive sub' Parkhill, before being brought down in the penalty area.

Referee Hunter pointed immediately to the spot and Ben Doherty did the rest, planting his spot-kick high into the corner past the despairing give of Morris.

To their credit, Glentoran didn't give up despite their numerical disadvantage on the pitch and on the scoreboard.

They introduced a number of attack minded players in a bid to get back in the game and were rewarded for their embition when they pulled a goal back in the latter stages.

They came close to levelling on a number of occasions but Coleraine held on to record a solid if not spectacular victory.

But it's all about progression at the end of the day and, in that regard, this was a case of job done.

Yes, the team has played better this season and it was a scratchy enough performance in parts against an understrength Glentoran team, but that won't matter a jot when the draw for the quarter-finals is made on Saturday and Coleraine's name is in the hat.