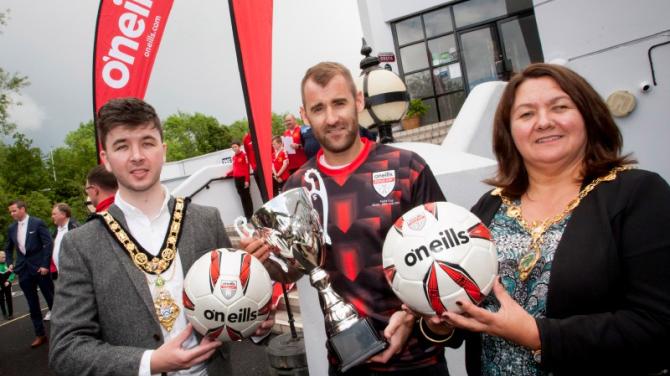 NORTHERN Ireland International and Aberdeen FC winger Niall McGinn was the special guest at the gala launch of the 2019 International O’Neills Foyle Cup in Derry on Sunday.

The former Derry City and Celtic star returned to the banks of the Foyle as guest of honour for the launch of the prestigious flagship youth soccer tournament which will take place from July 22nd-27th.

McGinn – who played in the tournament with Dungannon Swifts – praised the O’Neills Foyle Cup for the brilliant opportunities it has provided for young players to showcase their footballing talents.

He said: “I have great memories of playing in the Foyle Cup and the excitement of meeting players and coaches from both the local and pro teams who come to play in this competition each year.”

The 31-year-old winger who was part of the Derry City side which won the League of Ireland Cup in 2008, said: “I am honoured to be part of the 2019 launch of this fantastic tournament which gave myself and many other local kids the opportunity to progress into professional football clubs both at home and abroad.”