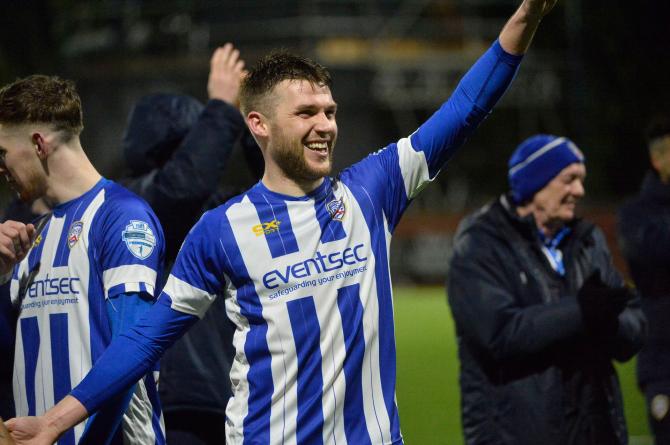 Coleraine midfielder Stephen Lowry is likely to come up against his brother when the Bannsiders take on Crusaders in Saturday's Tennent's Irish Cup semi-final.

Coleraine will look to become the first side since Linfield to achieve a hat-trick of Irish Cup final appearances when they face Crusaders in Saturday's eagerly anticipated semi-final at the Oval.

The Blues achieved the feat between 2009 and 2012 and now only Stephen Baxter's men stand in the way of the Bannsiders who lost the final two years ago before defeating Cliftonville 3-1 12 months ago.

They face a Crusaders team hell-bent on winning a first Irish Cup in ten years in a match which will be shown live on BBC NI.

Rodney McAree's side go into the game on the back of a disappointing 1-0 defeat to Institute in their last game but the manager believes his players will rise to the occasion this weekend.

"Training this week has been good, it's been competitive and sharp, and we have done everything we wanted to in terms of preparation," he said.

"After last Saturday it was important to get everybody working again and we've had two very good sessions this week.

"We've looked at this game and identified areas which we can work on, in terms of what we want to do and what we need to do to stop Crusaders.

"The boys have a point to prove after last weekend but it's an Irish Cup semi-final and I have no doubt that we'll get a performance.

"On our day we are capable of beating anybody. Crusaders will probably start as favourites but we will go to the Oval with the mindset that we believe we can win," he added.

"You only get one opportunity in a game like this so we want to play on the front foot and go out and try to win."

As current holders of the trophy, it's clear that no-one wants to let it go without a fight.

"I know how the town and the area has enjoyed having the cup and we don't want to give it up easily," said Rodney.

Saturday's Tennent's Irish Cup final has a 5.30pm kick-off at the Oval in Belfast.

Report and reaction in Tuesday's Chronicle.