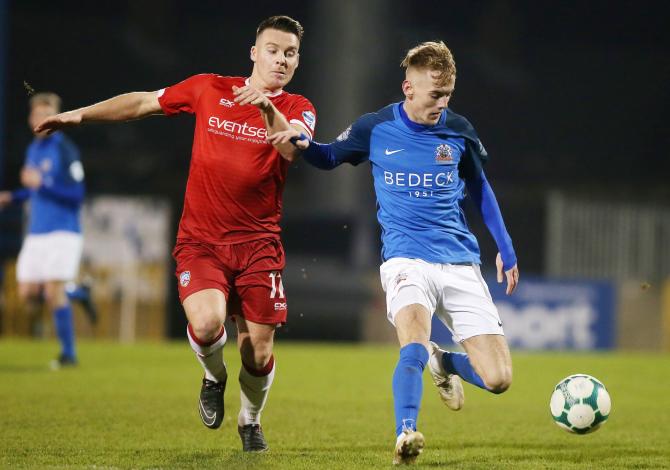 Glenavon will be without influential midfielder Mark Sykes for their trip to Coleraine on Saturday.

COLERAINE manager Rodney McAree says his players owe themselves a big performance against Glenavon in Saturday's Danske Bank Prmiership clash at the Showgrounds.

The clubs have met twice before in the league this season with the Lurgan Blues winning handsomely on both occasions, including a 4-0 drubbing at Mourneview Park live on television.

"I think the players owe the supporters and the club a performance on Saturday, but they owe it to themselves as much as anyone," said Rodney.

"We were good for the first 20 minutes at Mourneview and we started very well in the home game but we failed to perform for the full 90 minutes.

"On Saturday, we need to make sure we get off on the same foot but keep it going," he added.

The Bannsiders could move to within a point of their opponents in fourth place with a win and go into the game on the back of positive festive period.

"I feel that we have taken a step forward and the biggest thing for me is hard work - the players have set the bar now and it is up to them to ensure they reach that target every week."

McAree will check on the fitness of a number of players prior to the game, including club captain Stephen O'Donnell. He has missed a number of games recently with a knee injury but is close to a return.

Midfielder Aaron Burns is stil struggling with a niggling achilles while strikers James McLaughlin and Alex Gawne both picked up knocks during the week and will be monitored right up until kick-off.

There is better news, though, in respect of January signings Ben Doherty and Jamie Glackin: both men were forced to leave the field early as they made their debuts in last week's Irish Cup win over H&W Welders but both are expected to be fit this weekend.